I am delighted to be able to announce that the Norfolk Medieval Graffiti Survey has just been awarded the prestigious 2013 Marsh Award for Community Archaeology. This national Award, run in partnership by the Marsh Christian Trust and the Council for British Archaeology, is given to a community archaeology group in order to recognise and promote high quality archaeological work being carried out by local communities. The award was due to be presented to the group by Historian and TV presenter Michael Wood at a ceremony at the British Academy in London on Monday. However, due to the dreadful weather conditions, which left much of the country cut off from Norfolk (poor things!), the ceremony was cancelled.

I am sorry that I couldn’t tell all the volunteers prior to now, but I was asked to keep it all very quiet until it was officially announced. On a personal level I am obviously delighted by the news. This project began only three years ago, with no budget, no support and a few mildly crazy ideas. Since then it has grown into something that is making a real difference to both people and archaeology – although the ideas are still pretty odd at times. It has made a number of nationally significant discoveries, invented the concept of the demon trap and the spiritual land-mine and continues to generate media interest with every passing week.
However, the real strength of this project is the volunteers. The people who go out in all weathers to spend many hours in often cold and draughty churches – staring at the walls.  This award is really not a recognition of the project – but of the project’s volunteers and their continued enthusiasm. 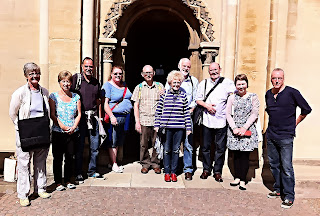 One of the other strengths of this project has been its ability to cross boundaries. The NMGS has been a success simply because it has been supported by wonderful people and organisations with shared ambitions. Close working relationships with other organisations such as the Norfolk Archaeological Trust, the Waveney Valley Community Archaeology Group and even our beloved Ragged Ramblers has allowed the NMGS to reach individuals that otherwise might never have heard of us. In return they have offered the group new skills, talents and enthusiasm.
Thank you all – and very well done. It has been a real honour working with you and I look forward to many more church surveys together. Congratulations.
Posted by Matt Champion at 22:12