Graffiti as art? Yes, and how I got it so very, very wrong...

Graffiti. Is it bad? Is it good? Is graffiti even a 'thing'. Is it destruction? Is it art? Does it have meaning and function beyond the immediate act? Beyond the paint dubs and scratches on the wall? Is it something we should treasure, or something that should be obliterated from the walls without thinking, in the same way we would brush away, without thought or contemplation, a cobweb in a dusty corner? What is its point and, in these less than simple, less than easy, times - does it have any true meaning and impact in the modern world. Can it influence, for good or ill, the modern world of hate and destruction, and those of us who inhabit it? Well, today some of those questions were answered for me. Not all, but some - and in a place where I certainly didn't expect to find any such answers.

Creswell Craggs is one of England's hidden gems, that far too few people know about, and far too few people visit. I guess the clue is in the term 'hidden'. Visually the site is simply stunning, and totally unexpected. After driving through a landscape that still echoes an invasive a destructive industrial past of coalfields and massive piles of mining waste you almost stumble upon the place. Today it is a wooded limestone gorge or ravine, complete with picturesque lake, criss-crossed with enticing paths and picnic areas. In anyone's book the site would be worth visiting simply for its beauty. However, what makes Creswell Craggs so very, very special is the fact that the rock walls of the ravine are lined with caves - caves that were once home to the early inhabitants of this island - at a time when it wasn't even really an island at all. And here those early peoples left their mark. They left their mark in the archaeology of the site, and upon the walls of the caves themselves - England's only examples known to date of prehistoric cave art. England's earliest graffiti. 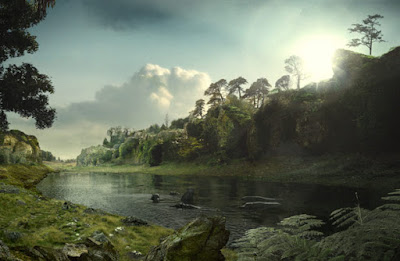 And yet my visit today wasn't centred upon the caves and their thousands of year old etchings, Nope. Instead I found myself spending my time in the rather lovely visitor centre located at one end of the ravine. I could have spent my time looking at the exhibition of the archaeology of the site (truly fascinating), or happily wiled away an hour or two in the gift shop or rather stunning little cafe. However, today marked a very special event, and I was there to join in a celebration. Today marked the end of the first stage of the surveys being carried out by the Derbyshire and Nottinghamshire Medieval Graffiti Survey (DNMGS), and I was there at the invitation of project coordinator, Matt Beresford, to talk about the medieval graffiti that the volunteers had recorded so far. It was fun. It was informative. We all seemed to enjoy ourselves, and the results were most certainly impressive. However, the bit of my day that really made an un-looked for impression was the ten minutes I spent in the gallery area on the ground floor.

When Matt Beresford set up the trial project I supplied him with a letter of support, and we discussed how the project would work, what were the aims and aspirations, and what he hoped that everyone would take away from it? All fairly standard stuff really. However, I don't mind admitting that I was somewhat surprised by one aspect of the project that Matt was keen to pursue. As well as the archaeological training and recording at historic sites, Matt also wanted to run an integral art project. His aim was to get the volunteers to work with an artist to create works of art inspired by their findings. Inspired by the medieval graffiti. 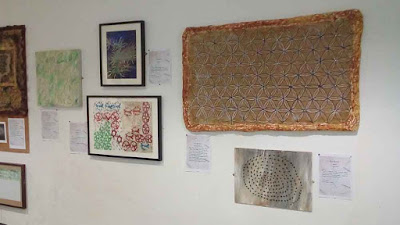 If I'm honest I was more than a little surprised by this part of the project. I was in fact dubious in the extreme. It seemed a waste of time to me. A wee bit nuts. What could the volunteers gain from this? What insights and understandings would it give them? What could 'modern' art take from something that I've spent several years arguing isn't in any way an art form, but rather a social history record of faith and belief? However, it was Matt Beresford's project, so who was I to say what he did with it? He could have the volunteers expressing their emotional reaction to the graffiti in the medium of contemporary dance if he so wished. It was his baby after all.

Well, I was wrong. Very wrong indeed. And it only took those ten minutes wandering along the gallery at Creswell Craggs, where the fruits of their many months of labour are on display, to realise just how wrong I actually was. 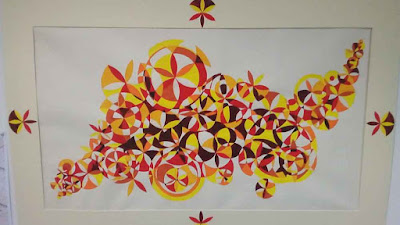 I'm not going to spoil it for you, or start talking about the way I actually felt a new connection to a lot of very familiar motifs - old friends I've seen carved into many a stone. Each artwork speaks for itself, as they were intended to. Each piece connects the present with the past, the ancients symbols and motifs finding new meaning in a very modern setting. Every single one, with their short descriptive text, showing me that the act of creating these artworks has indeed spawned new ideas and understandings. Instead I'd simply suggest you go and see for yourselves. Go and discover what medieval graffiti can be translated to in the modern world, at the home of England's oldest artwork. 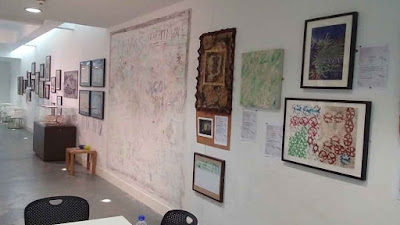 The exhibition is only on for a few short weeks more, but if you do visit, tell them that Matt and Matt sent you - and don't forget to try the cafe...

You can also read more about the DNMGS survey here - https://dnmgs.wordpress.com/about/

Posted by Matt Champion at 23:33 No comments: