If you wander into just about any medieval church in England, or at least one that hasn't been too heavily messed around with by the Victorians and their brutal concepts of restoration, then they are all around you. The angels and demons. You may not see them immediately, they may not leap out at you, but they are there. Quietly watching, as they have been down the long centuries, through the brightest of Summers - and the bleakest, darkest of midwinters. They will be there, as they were through the tumult of the reformation, the dark days of that most uncivil of civil wars, and the long, long years of the nineteenth century. They have survived wars, plague, famine and fire - and will still be there long after you and I have become nothing more than faded memory to a jaded world. Still there, still watching - the angels and demons of the medieval church. 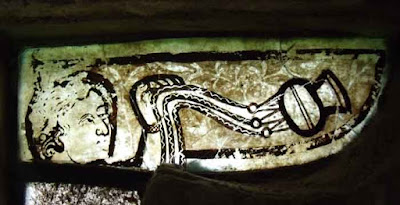 The angels and demons are sometimes easy to see. The carved angels that support the timbers of the most complex and inspiring of roof trusses. Wings outstretched and, despite the impact of many a sour hearted puritan musket ball, still glowing with their original colour. Angels carved in attitudes of prayer on dark oak bench-ends; details worn smooth and pale by the passage of a thousand caressing hands and the passing of the years. And then there are the angels of light. Those ethereal creatures that survive in stained and painted glass, that radiate sunlight in a dozen different colours, and who watched on in mute horror at the destruction wrought upon many thousands of their fellows. Who watched as painted majesty became mere fragments of shattered glass, and windows fell from golden glory to become mere holes to let in the light. And the others. The ones that still adorn the walls in a bare handful of churches. Those that sit upon the right hand of God in the Doom paintings that once shouted out their message of salvation and damnation from above the chancel arch, giving a helping hand to those souls that were destined for the eternal joys of heaven. And, in a few remote and blessed churches such as Barton Turf in Norfolk, the massed choirs of angels that march in triumph along the painted panels of the rood screen, missing only the faces that once so offended the iconoclast reformers. 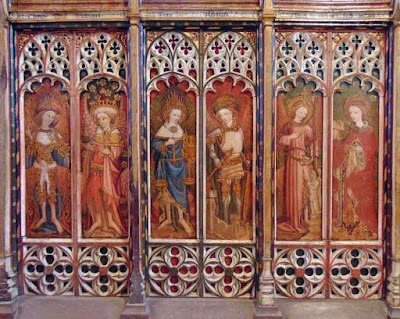 And then there are the demons. The grinning, contorted faces that balance their angelic counterparts above the chancel arches, casting the souls of the damned down into the pit; an open mouthed devil that spews forth flames and the stink of sulphurous burnt flesh. The carved wooden demons that decorate the misericords in dozens of church choirs, grinning lewdly up at the fat clerical arse above them. The demonic gargoyles and grotesques that roost and colonise the corners and buttresses of a hundred church towers; leering, jeering and fondling themselves in an attempt to drive off the evil eye and outrage the rector and timid goodwife. You are never far from the demons of the medieval church. Peeking from behind stiff-leaved stone foliage, peering down from the rafters, or scuttling beneath the choir stalls. They are there. Their millennia long battles with the angelic host put aside at the creaking of a church door, a glimpse of sunlight, and your arrival...

Our churches are full of angels and demons. The product of a medieval theology that, in essence, boiled down to 'no Devil = no God'. The church NEEDED devils and demons to exist, to balance each other out and show that salvation wasn't a given; that the fate of your soul was in your own hands, and that a single act on your own behalf would determine which side of the chancel arch you would eventually find yourself on. The battle between the light and the dark wasn't won, but was an ongoing struggle that, despite God's reassurance of eventual victory over Satan, would have many casualties along the way. A battle that, you would expect, would be echoed in the graffiti on the walls of our churches. It isn't.
There are certainly echoes of the great medieval battle for the souls of the congregation amongst the thousands of graffiti inscriptions that we have recorded. The multitude of apotropaic marks that adorn almost every surface you can think of, designed to ward off evil and the unkindly, death bringing, gaze of the ever watchful evil-eye. There are the prayers too. The names of God etched into the stones, the Latin invocations and the images of hands raised, and forever frozen, in the act of blessing and benediction. And there are the demons there too. Etched deep into the surface, like the wide-mouthed, sharp toothed demon of Troston, or the devil of Beachamwell; armed with a metal meat-hook, to strip the eternal souls of the damned from their earthly and stinkingly corrupt flesh. The demons are to be found everywhere. Staring right back at you from the walls.  But where then are the angels on the walls? Where are the agents of eternal balance, that celestial militia whose vigilance keeps the evil at bay? They are simply not there. They have not been obliterated with the passage of time. No Victorian restoration has wiped them from the walls. The massed ranks of Demons did not drive them upwards to the rafters in one last great battle across the stonework. They are simply not there, and never have been.
This is something that has only really occurred to me in the last few months. After many years of hunting down and recording medieval graffiti inscriptions. As the numbers of recorded inscriptions grew into the thousands, and then the tens of thousands, so too did the number of demons that we recorded. Demons from all over the country, from all manner of churches, hidden in all manner of places. But no angels. One 'possible' angel that came to light only very recently; the statistical anomaly that we can never apparently do without, but no serried ranks of the angelic host. They aren't were you might expect them to be, and the question has to be why?

There is, I believe, a really quite simple answer. An answer that the graffiti itself points us towards. Whilst the walls of our churches may be reflections of medieval beliefs, they are reflecting only certain aspects of that belief. They do not show us everything, but only those things that, to the members of the medieval congregation, were real and to be feared. The walls of our churches are a testament to the fears and horror of the medieval mind. The angels were not in that class. Angels are part of the orthodox church; the ethereal long-hoped-for salvation of the soul - but they had no part in this world. In this reality. People were not visited by angels on a regular basis, with a few notable and usually frowned upon enthusiastic exceptions, and the angels were largely reserved for the divine. Their images may adorn the windows of the church, and be carved into the ornate woodwork of the pews, but that was the only hold they had in this world. Demons on the other hand were all too real. All too much a part of the everyday reality of the medieval parish. It was the demons that brought the life threatening illness of a much loved child. It was the demons that caused the unexplained death of a much needed sow. It was the demons that brought the harvest wrecking storms, the lightning bolts from a dark sky, and the fires that could lay waste a settlement in a matter of hours. The demons were to be feared, for on earth there were no angels to stand between a naked soul and the evil that floated through the miasma that surrounded them. The dread demons could bring forth a plague that would sweep an army from the face of the battlefield, and there were no ranks of celestial militia to take their place. The demons were to be feared because they were real, they were tangible and they were there - walking amongst them. And so it is the demons who find themselves scratched into the walls of our churches alongside the prayers and blessings, alongside the apotropaic marks and the symbols of hoped-for protection.


The walls are the haunt of only the demons, not angels...
Posted by Matt Champion at 22:22 No comments: