The trouble with Lichen: life and death in an English churchyard

It feels a little like the Spring is coming early in north Norfolk. The lazy Norfolk wind still has a sharp edge to it, but that can be true of even the brightest Summer's day up on the coast, where the next stop looking north is the Arctic. But the blankets of snowdrops are now faded, to be superseded by the bright yellows of early daffodils and pale hues of the bank primroses, and there are hints of blossom on one or two of the more enthusiastic of trees. Even the sun made an appearance as I drove along the coast road this week, passing by the empty dark eye-sockets of crumbling pill-boxes, and jagged-teeth of broken tank traps from another tragic conflict. Now all but lost amongst the ranks of golden daffodils, set beneath a ridiculously blue sky. A blitz sky we called it in 1940. On such a day, and never more in need of peace, I found myself indulging in a quick stop at a couple of Norfolk's more interesting medieval coastal churches. Twelve hundred miles away to the east, people are being bombed. People are being shelled. People are dying. 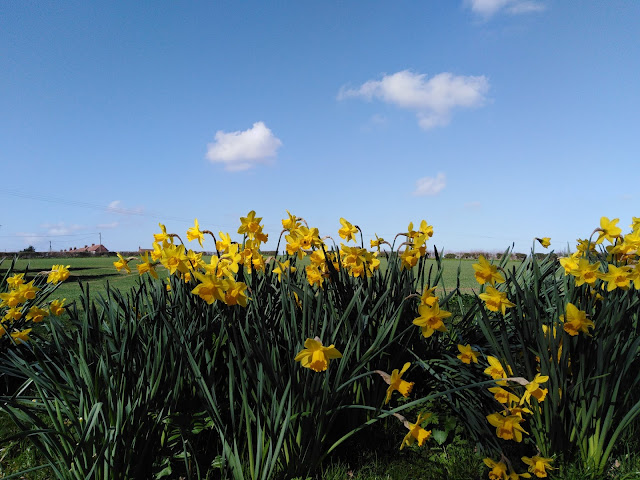 My first stop was the church at village of 'Upper Sheringham', a cluster of brick and flint houses and cottages now lying over a mile from the sea. Not, the locals will tell you, to be confused with plain old 'Sheringham' - the Victorian seaside resort that sprang up on the coast itself, growing out of a modest collection of huts and lean-tos where the fishermen of the village stored their boats and nets. Upper Sheringham today stands aloof from its larger seaside neighbour - set aside from the nineteenth century gothic revival villas and sprawling twentieth century bungalows, and protected by a barrier of inflated house prices and layer upon layer of the subtle shades of a Farrow and Ball paint chart. Twelve hundred miles away to the east, people are being bombed. People are being shelled. People are dying.

The church itself is a quiet joy to behold. For a medievalist it contains a number of unique survivals, that have defied time and the destructive hands of man. The font with its elaborate traceried designs decorating the bowl. The rood screen, now largely devoid of pigment, but surmounted by a complete (albeit restored) rood loft. One of the only ones to survive anywhere in the east of England. The early Tudor brasses in the south aisle, created with an elegant and understated simplicity. The late medieval carved bench-ends, that include the tragic, the comic, and the downright odd. There is even a small and discrete selection of ship graffiti etched into a single pier in the south arcade. Any one of these would make the church worth a visit.

Beyond these sterile survivals of a bygone past it is abundantly clear that this church is loved. Loved and looked after by the community it serves. It is always open, and it's clear that it still acts as a hub for village activities. People still meet here, as they have done for over five centuries. Seeking peace within these ancient walls.

And yet a church is always an on-going project. There is always work that requires doing, and maintenance that needs to be undertaken. A roof that has remained watertight for five centuries does not do so without being well looked after, and gutters and drains do not clean themselves. They all require care, and people that care enough to undertake even the seemingly mundane tasks. And it has ever been so. Anyone who has ever sat down and read medieval and Tudor churchwarden's accounts will be all too familiar with the records of windows being mended, locks being changed, floor tiles being re-set, and roofs being repaired. Whilst each church may be a monument to medieval faith and devotion, they are as much a monument to the dogged persistence of the centuries of churchwardens, builders, and handymen. 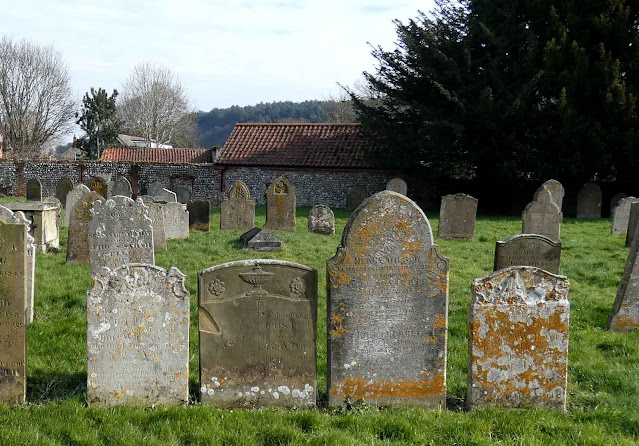 I leave the quiet solitude of the church and wander out in to the churchyard. An undulating sea of canted stones, rakishly set amongst the rough turf beneath the new budding trees. A mixture of colours and textures, and each a little tableau of a life, and death. Each one telling a fragment of a story, leaving the reader to fill in the blanks. A shinning memorial to a bomber crew that never quite made it home during another hellish war. The young mother who died in childbirth, leaving behind two older children from a former marriage. A young Norfolk 'boatman' who drowned trying to claw a meagre living from the fickle dark ocean. Deaths that took place centuries ago, but each leaving their tragic tale in a Norfolk churchyard. I wander from stone to stone, trying to do them some justice by reading the words that were left behind them. Trying to make a little sense of the senselessness.

And whilst I wander in this quiet churchyard, amidst the gold of the daffodils set under a ridiculously improbable blue sky, I ponder upon the level of work before me. The thousands of hours of work put into making these stones, and creating this tranquil space. The hours that people spend maintaining this home of past memories. For what is true of the church is also true of the churchyard. God's Acre takes some maintenance. Walls, gates, and pathways all need to be maintained and looked after. They certainly don't look after themselves, and at my own local church it takes a small army of willing and enthusiastic volunteers to keep it all in good order.

Recent years have seen some changes though. Changes that some people may not wholly approve of, but changes that have been made to help local wildlife and biodiversity. Indeed, it is strange today to find a churchyard that doesn't have at least one section where the mowers rarely go. A section of the churchyard left for wildlife, where the grasses and wildflowers can follow their natural lifecycle rather than succumb to the uniformity of Mr Flymo. And it works. Anyone who has wandered slowly through such a churchyard in Spring or Summer can't but help notice the bees, the butterflies, and the wildflowers - all just 'doing their thing'.

In fact churchyards are now recognised as being important havens for wildlife across the UK. Especially in areas where much of the countryside or urban landscape is intensively managed, these small enclosed areas where nature is largely left unmolested represent an important natural habitat. For plants, insects, and all forms of wildlife - and long may it continue to be so.

However, not everything is coming up roses in England's little gardens of Eden. In recent years I have begun to notice a new and rather worrying trend - that of cleaning gravestones. I'm not in general talking about the modern polished marble slab, but a growing tendency to scrub clean the older stone grave-markers from the seventeenth, eighteenth, and nineteenth centuries. In most cases it is clear that it is done with the best intentions, to try and make legible the inscriptions, and I do suspect (but have no proof) that some of it is done by those trying to trace the resting places of their ancestors. But it really should stop. 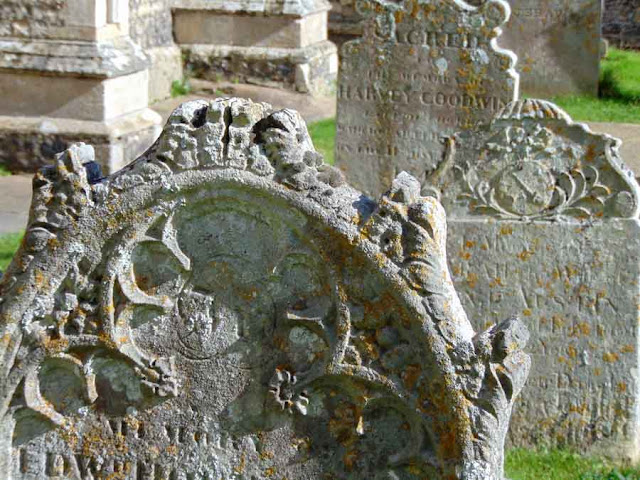 The most usual cause for people to want to clean these gravestones is that they have become over run by nature. That the inscriptions are now hidden beneath layers of spreading lichen and mosses. And it is never more obvious than whilst wandering around a churchyard like that at Upper Sheringham. The stones have been weathered by nature and time, and slowly grey and rust coloured lichens have crept across their surfaces. And it these little regarded lichens in particular that suffer at the hands of a scrubbing brush, warm water, and good intentions.

I won't go in to too much detail here about the lichens themselves - as I am no expert - beyond stating what an incredible collection of organisms they are. In most cases lichens are not usually one organism, but two. A fusion, collaboration, and in some cases parasitic relationship, between a fungus and an algae. They come in a wide variety of shapes and colour, and some can grow incredibly quickly, whilst others can take many centuries to even establish themselves. To quote world-renowned botanist Professor Stefan Buczacki (yes, him off the radio...) 'of the 1700 or so British lichen species, over 300 have been found growing on churchyard stone in lowland England and many churchyards contain well over one hundred species. Almost half of the churchyard species are rare, having been found in fewer than ten sites, while some seldom occur in any other habitat'.

In places like East Anglia, where there is no naturally occurring stone beyond brittle flint and the soft gingerbread of carrstone, churches and churchyards represent a unique environment for certain of these lichens to grow. Small islands where existence becomes a possibility.  Havens, beyond the walls of which they simply cannot survive. And each gravestone that is scrubbed clean, even by the most well meaning of individuals, represents the destruction of a small ecosystem. Given the rarity of some churchyard lichens, perhaps even a small extinction. Another pointless death.

So as I wander back towards the car, beside the golden daffodils and beneath that ridiculously improbable blue sky, I ponder what we to do with a churchyard full of moss and lichen covered gravestones? In such times, when Europe drops once again in to chaos and bloodshed, is it even right to be worrying about such small losses? To concern ourselves with the loss of a single lichen species in an English churchyard, when there is so much other suffering taking place?

My own view is that now is perhaps a time to reflect upon all forms of life in this world, and how precious they are. And perhaps even celebrate the fact that these monuments to the long dead have become home to so much life. Where tragic stories are slowly being covered over, as memories fade, with whole legions of sprawling life. Each gravestone a new colony. So perhaps it is best that we just leave them be. After all, the dead won't mind.

If you want to know more about the wildlife and ecology of the average English churchyard I can suggest no better introduction than Stefan Buczacki's 'Earth to Earth: A Natural History of Churchyards' (Unicorn Publishing, 2018).

You can also donate to the Red Cross crisis appeal to help those suffering in Ukraine here - https://donate.redcross.org.uk/appeal/ukraine-crisis-appeal