Graffiti, Gaza and THE GIRL: Why I do what I do (with a passing reference to Cornish pasties)

Being someone who stares at the walls rather more than most people, and someone who believes that graffiti has a certain value as a historic record, it is rather odd when I am confronted with the most obvious question - why study graffiti? It happened a couple of days ago in the city of York, that noble tourist magnet and coffee shop haven of the north. I was in the city to fill the civic parking meters with cash, deliver chocolate to members of the Council for British Archaeology (Thorntons - no messing about!) and take some pictures of the graffiti in the minster. As you'll probably already know I was in the city a month or so back leading some lovely American academics on a tour of the medieval graffiti in the minster. Much was found, pics were taken - some of which were subsequently found to be 'rather poor'. I blame the previous evenings visit to the Yorkshire Terrier. As a result new pictures were required and chocolate delivery seemed a perfect pretext (just so you know - the CBA now 'demand' that ALL visitors supply them with chocolate - cookies at a push - but not the yucky ones with smarties on the top). 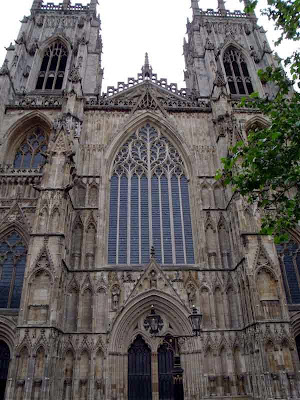 So I went to the minster. I crept in the back door (there isn't one - don't bother looking) and began to shine a torch on the walls and take a few pics. Now the first thing that usually happens is that a cathedral guide will sidle up and ask what you are up to? Their role, as custodians of the 'public' face of the minster/cathedral, is to check that you are...


b) not a complete nutter


A quick mention of mason's marks and 'lovely' C18th graffiti (which they know about) is usually enough to send them happily on their way - leaving you to scour the walls for the really interesting stuff. However, if you shine a light on the walls of a minster, church or cathedral it does tend to attract a certain amount of attention. The kids will be the first. They will drag their reluctant parents towards you, demanding of them to know exactly what you are doing. Let's face it, for many of them this is the most exciting thing that's going to happen in the building until they get to blow months of hard earned paper-round money in the gift shop. Are you looking for cracks? Is the whole thing about to tumble down around their ears? Will they get a chance to post the pics on facebook/tumblr/twitter etc? The parents are obviously reluctant to ask. After all, every modern city dweller has spent decades training themselves to ignore the weird guy talking to the walls/light fittings/invisible aliens in the tin-foil hats. Why start now - after all, they're on holiday? However, eventually, pressured by the un-ending questions from little Jimmy/Emma/Jordan, and aware that the weird wall staring guy 'can' actually hear them, they will sidle across and ask what you are looking for. 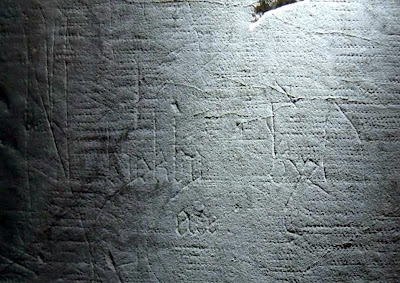 This is the point it gets interesting. You tell them. You explain all about medieval graffiti, how much of it still lays undiscovered, how it can tell us a great deal about the people who built and worshiped in this building, what some of it means. Suddenly they are engaged. Graffiti - now that is something they can relate to. They understand the concept. It isn't some weird academic concept involving ancient liturgy - but an immediate and tangible point of access to 'real' medieval people. It is at about this point that you should read them the health warning - that states that medieval graffiti hunting can be, upon occasion, more addictive than crack cocaine, Ginsters Cornish pasties after one pint too many and those odd purple jelly babies - all combined together.


However, this time was different. This time there was the girl. Actually, let me rephrase that. This time there was THE GIRL. Early teens I'd say, American from the accent (east coast) - and obviously destined to be either a nuclear scientist or civil rights activist who will be the bane of all right wing western government. She was obviously smart. I mean really smart. Her parents were obviously dragging her around the cultural sites of Europe in the hope of widening her education, or perhaps to distract her from beginning her own left wing civil rights movement at her obviously expensive private school.


Mum and Dad were the first to come across to see what I was up to. Both just a little too keen to be honest. A little too loud. A little too 'gee whiz'. Both obviously trying to interest THE GIRL and get her to put down the iphone and 'take an interest'. So, we got to talking...


THE GIRL did eventually put down the phone and listen. In fact by the look of concentration on her face she appeared to be listened pretty darned hard. It was clear that, as far as she was concerned, if her parents found the wall staring guy fascinating then she wasn't going to be fascinated. She, intent on showing off her remarkable and expensively acquired intellect, was going to utterly destroy him and all he had to say. So she was going to listen, find the faults in the arguments and then DESTROY!


The problem was, of course, that she couldn't. I'm not trying to brag here about what I do, it's just that there aren't really any arguments to debate. We simply show them what's there, make it available to them, and let them think it through themselves. After ten minutes even THE GIRL was running her hands across the stonework, feeling for inscriptions that haven't really been seen for over five centuries, and asking questions. And then it came. Just as they were leaving. THE GIRL, who had by this time become 'the girl', drew herself up, remembered that she was in fact a teenager and therefore, without question, NOT interested - asked the question. "Why", she asked, "is this stuff important? I mean, like, these people have been dead for centuries - so what does it matter what they wrote on the walls? There are hundreds of people dying in the world - in Gaza (parents frowned), Iraq and Syria - why is this old stuff important?" 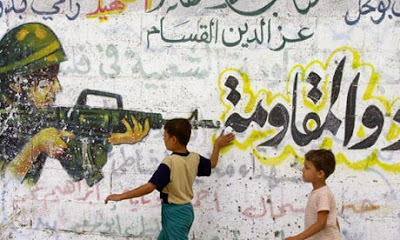 BLOODY good question really. One I've asked myself a lot recently, I can tell you. Surely all the graffiti volunteers, and myself, and every other community archaeologist out there, would be far better off devoting our time, talents and energy to working in a food bank or relief agency? Surely it is better to try and help the living than recording the graffiti of the long dead?


But this is the answer I gave her. The people who left the marks on this wall were just like you and me. Just like the people suffering today in Gaza and the Middle East. They too had hopes, dreams and fears. They too had joy and suffering. However, unlike some of the people today their story remains untold. They had no internet, no facebook and no twitter - just the walls. So they scratched their messages here - laid down their prayers in the stonework - in the hope that someday God or someone would take note. For many of those long dead people these markings may be the only thing they have left on this planet. The only mark that they have left upon this world. Their only testament to existence. They left these messages in many cases in the hope that they would be read - much like the people of Gaza are leaving messages on the walls today. And perhaps, just perhaps, by beginning to understand just a little bit more about those people of the past we will try and not replicate their mistakes. Perhaps.


It's what I told her - and she nodded, put her iphone in her pocket and wandered off after her parents - undoubtedly exiting via the gift shop. And if still not sure that it was the right answer...
Posted by Matt Champion at 22:52 3 comments: