Just how many archaeologists are there then?

Firstly, I should say, if anyone is expecting anything in this post about historic graffiti - you are going to be sadly disappointed. Best move on now. There's probably something good on the telly anyway.

So, the question has arisen - again - about how many people in the UK actually work in archaeology. This shouldn't be a difficult question to answer in many professions, but given the diversity of archaeology as a discipline, and the shocking way in which many commercial archaeologists are treated, it has traditionally caused a few issues. The result was a series of studies entitled 'Profiling the Profession'. In depth analysis of exactly how many people are employed by the sector, and how those patterns change over time. Even as it stands the study most usually doesn't make pleasant reading.

However, I recently made a somewhat rash statement on Twitter, replying to someone else's tweet, that caused a little bit of a stir ('Surely not?' I hear you cry...). A tiny bit of an upset in certain quarters. So - all I actually said was that most archaeologists do NOT work in commercial archaeology. A harmless enough statement you might think. However, it caused a few hackles to be raised. And why would that be? Well, because it flatly contradicts the figures published in the 'Profiling the Profession' report.

So did I make the statement just to cause a bit of trouble on Twitter? As you all know, that would be just SO unlike me... No, the reason I said it is because it's true - and based upon a very large, and really boring, piece of unrelated research I undertook about 18 months ago. It wasn't published at the time because it was suggested it might ruffle a few feathers. However, as feathers already appear to be ruffled... Sod them. I'll publish the outline anyway.

According to the latest 'Profiling the Profession' figures there are approximately 4792 individuals working in archaeology - you can read the full report here - https://landward.eu/wp-content/uploads/2013/10/Archaeology-Labour-Market-Intelligence-Profiling-the-Profession-2012-13.pdf

Of those 41% work in non-commercial archaeology - leaving the other 59% working in the commercial field (estimated at 2812 individuals). You can see the full breakdown in the chart below - which I handily swiped from the report itself. 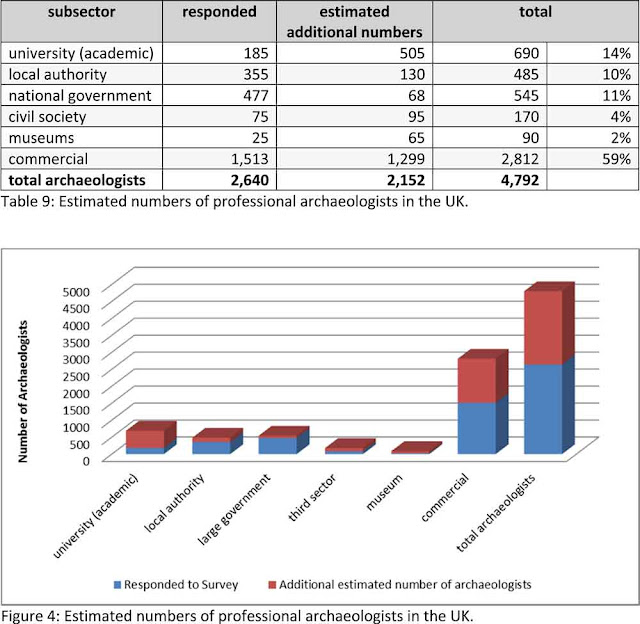 So what the problem? Well it's a simple one. The report MASSIVELY and demonstrably underestimates those working as archaeologists in the academic sector. The report estimated that the actual number of archaeologists working in academia at 690. According to my own research the figure is somewhere between 1600 and 1900. And that is probably on the low side.

So, a few caveats to begin with. I used the same definitions for someone working in archaeology as the 'Profiling the Profession' analysis did. So it doesn't include volunteers, hobbyists, metal detectorists, etc - just those who receive financial remuneration for working within one of the many different facets of the discipline. With regards to academia - I also didn't include honorary positions, emeritus posts (unless they were specifically teaching), or 'associates'. Nor did I include the many postgrads who actually undertake paid teaching within the discipline. By the definitions of the 'Profiling the Profession' report I probably should have - even though they usually are only part-time etc. However, had I included those individuals the final figure would have been at least twice as high.

I would state that I also didn't get data from all the universities, hence the variable figure above, but publicly available staff and teaching lists are accessible for approximately three quarters of UK institutions. This data is also out of date now, by about 18 months. I also concentrated almost solely upon archaeology departments, so missed most of those archaeologist working in other departments - such as history or museum studies. I also probably missed a lot of those working in departments associated with the science of archaeology. Sorry! The data from the 'Profiling the Profession' report was from 2012/13, whilst mine was mainly from 2018. However, I'm pretty sure academic archaeology didn't see a nearly threefold increase in those working in the area in the intervening five years. Just the opposite in fact.

To begin with, there are currently approximately 130 universities in the UK. I say approximately, as that also includes some University Colleges - but 130 is the generally accepted figure. According to the 'Profiling the Profession' report these 130 universities employ only 690 archaeologists. That's an average of 5.3 archaeologists per university. Sound credible anyone? Really? So lets look at a few examples then.

Firstly, the university of Cambridge Archaeology Department. Current staff role (not counting admins, emeritus, honorary, or associate staff) is 216. At any one time there are also approximately 150 post-grads - but we aren't counting them.

A similar story at Oxford, although not quite as many, with 92 on the staff roll (the same exceptions apply).

Then what about UCL? Well, leaving aside those working in the commercial wing as Archaeology South-East, and including only the emeritus staff who also teach (but again excluding post-grads, associates, etc.), we get a total also of 92.

So that takes us to a nice round figure of 30 UK universities. 30 out of the approximately 130, and we have already reached a grand total of 1147 archaeologists. Rather a lot higher that the current estimates of 690 for the whole of UK academia. And the list goes on. But I hear you say that not all UK universities teach archaeology, so not all the UK universities will employ archaeologists, so although the estimate may be wrong, perhaps it isn't that wrong?

So, my own research (which is admittedly a couple of years out of date, and wasn't able to access the staff lists for every UK university), indicated that archaeologists employed in academia to undertake archaeology in one of its many forms, numbered between 1600 and 1900, rather than the 690 estimated in the 'Profiling the Profession' report. Give or take.

So what does that adjustment do to the overall figures for the profession? What percentage of archaeologists actually work in the non-commercial sector? Well, if we take even the lowest figure indicated by my research for the numbers working in academia (1600), things look rather different. Suddenly there are 2888 archaeologists working in the non-commercial sector, as opposed to the 2812 in the commercial sector. Very roughly 50/50. Take the higher figure of 1900 working in academia and it's 3185/2812 (53%/47%). I am also absolutely sure that these figures err on the side of caution, as most universities don't publish details of archaeological technicians etc., so the actual figure is probably higher. As I said at the beginning, if I had also included the post-grads who are paid to teach in all the fields of archaeology (who would qualify as 'tutors' under the 'Profiling the Profession' definitions), the number would probably be more than double that.

So where does that leave the debate? Well, I think the main point here is a simple one. IT SHOULDN'T BE A BLOODY DEBATE. Get over yourselves. We are, after all, meant to be working together, in the same profession. Surely it benefits no one to distinguish between what is considered to be 'real archaeology' or assume that commercial archaeology is representative of everyone engaged in the field.