Dead Saxons on your doorstep: the archaeology of the personal...

There is the moment. The few seconds that drag out to last a thousand years, and in which time piles up against the gates of reality. Held there. It is 'the' moment. The moment you are standing in a muddy field, up to your knees in brown slime, with the incessant drip, drip, drip of the rain sneaking down the back of your neck, and with a biting January wind emasculating you far more effectively that a butcher's cleaver - that you realise that it has all gone wrong. That everything has gone, not to put too fine a point on it, completely and utterly tits up. That the straightforward has suddenly become immensely complex, and that the future now looks anything other than clear. Whatever that future is, it will invariably involve mud; mud in magnificently, crevise-findingly, impressive proportions. And paperwork. Lots of paperwork. This is field archaeology in Norfolk in January... 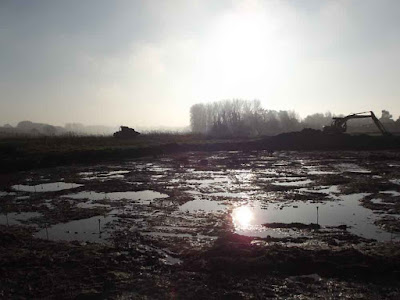 In front of you the JCB driver can be seen through the glass of his cab, slowly easing back the throttles, as he leans back in his seat, reaches for his baccy tin, and grins out at you in the rain. He knows we aren't going any deeper. From his birds-eye view, and with decades of experience on sites just like this, he knows he's going to be doing a lot of sitting around for the next few weeks. Sitting around in a warm cab, idly making rollies, content in the knowledge that he'll still be getting paid his two-fifty a day - and all the sport that archaeological mud wrestling has to offer.

You glance to your left, at Jim, the site supervisor, who is reaching the exact same conclusions in his head as you are. You can see the deadpan expression begin to diffuse his young face. This wasn't meant to happen. This wasn't meant to be here. We are both, quite literally, up to our knees in the shitty mud, have just watched the mother of all archaeological headaches unroll before us, and both know that the JCB driver (now reaching for his flask and newspaper) is actually getting paid far more for this than we are. In the warm, with the radio on... Indiana Jones it certainly isn't.

But there is the magic too. The other moment. To watch as, inch by inch, the dark, loam and silt rich topsoil is stripped away. Each dark inch revealing nothing out of the ordinary. And then, as the digger inches one tiny level further down, the curtain of black earth is drawn back. The last topsoil slides away to reveal the perfectly planned archaeology. It doesn't happen often. A few times in a lifetime. But when it does there is a feeling of watching a small miracle take place before you. One moment there is nothing. The next, a ground-plan that no drawing or drone image will ever fully do justice to. And the feeling that you are the very first to see this. The one that the dark earth has revealed her secrets to. The miracle of archaeology in wet ground. 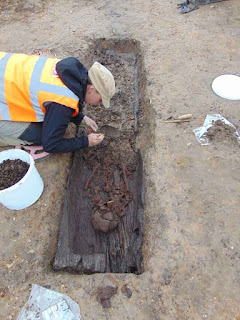 The scene shifts. A few days pass and the site become home to a high-viz convention of hard-hats and archaeological endeavour. The news is out, and eager troops of senior archaeologists converge on this pile of mud and history, all eager to establish their own credentials; their own place in the pecking order that will evolve. Each trying to hide the excitement, remain utterly professional, and objective. Mostly they fail. Above our heads drones do flypasts that wouldn't be out of place along the Mall, whilst tablets, computers and high tech cameras jostle beneath them. All trying to capture the moment of discovery. The moment that a 'nationally significant' site has appeared, out of the blue, beneath our very noses. Things that nobody has ever seen before. Fully intact plank-lined burials dating back over 1200 years, the outline of timber structures preserved in the wet sand and mud, and over eighty burials. Anglo-Saxons from the old kingdom of East Anglia, buried with reverence, at the very time the Venerable Bede was recording the seismic shifts in old England. Each one a clearly Christian burial, with no gold and silver placed in the graves to see them through the afterlife - leaving this world as poor and naked as the day they arrived in it. No treasures of coins and jewellery, but instead the treasure of knowledge; an insight into the possible beginnings of Christianity in England. A snapshot of a community at one of the most fundamental turning points in this nations past. The children and grandchildren of economic migrants who embraced a new god and built a nation. 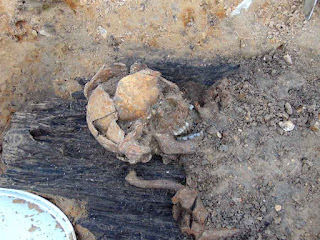 All there before us. The mud oozes, the whine of the drones increases, and the JCB driver, content at the spectacle, rolls another fag...

What happens now is the science bit. The bit that really separates modern archaeology from the treasure hunters of yesteryear. Each burial is painstakingly excavated, photographed and planned. Multiple environmental samples are taken from each grave, which will later tell us details we hope of the flora that once grew here. Each timber is sampled for tree-ring dating, which will tell us the exact year the tree was felled and, if we are really lucky, perhaps even the season. And once the bodies are in the lab then the real miracles of modern science begin. DNA will be looked at, telling us perhaps whether some of these are family groups, and isotope analysis can tell us even where they grew up. Where they 'locals', born and raised in this river valley, or were they perhaps first generation immigrants from across the North Sea? And yet, as each individual is meticulously uncovered and removed from the site by dedicated professionals from Museum of London Archaeology, I cannot but help feel some disquiet.

You see, the thing is, this is 'my' village.  This chance discovery has come to light a bare few hundred meters from where I live, in the very heart of my own community. It isn't just some fascinating and distant piece of archaeological science, but rather something close and very real. These people from a lost past knew this valley that I stand in today. They walked by this same slow river, worked these same fields, and looked up at the ridge-line to view the very same ancient barrows silhouetted against the sky. In fact, this Norfolk village with a Saxon name simply wouldn't be here if it hadn't been for them. They chose this place, and settled here by the river crossing, between the dark woods and the road that leads to the sea. They knew this place, and like my own family, called it home. And that changes things.

The science has to go ahead of course. There's simply too much that we can potentially learn from these people. Details from a time still referred to as the 'dark ages', that is now showing itself to be anything other than dark. But it was most certainly a time of change, a time of transition - when a new wave of immigrants adopted a new religion. A religion whose very early years in this country we really know very little about. Perhaps these quiet people from the dark silt and sands hold the key to understanding that process of transition? Perhaps they witnessed it first-hand, or were instrumental in it taking root? Without further study we will lose that information forever. However, what then? What happens once the scientists have completed their tests, and we have learnt all that we can learn? What happens then to these people of my shadow village by the river? 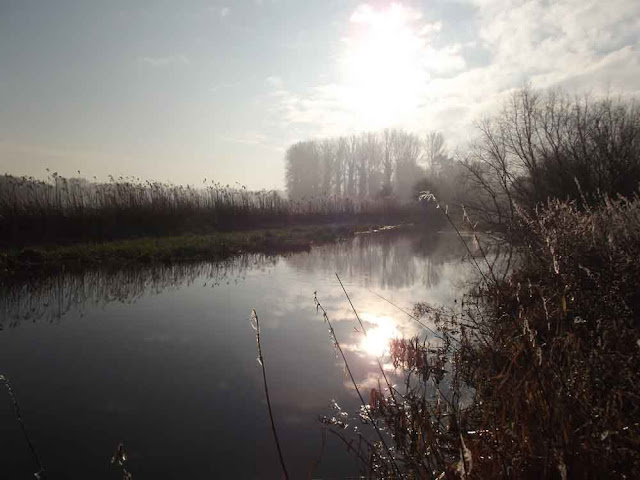 In some cases such remains simply end up stored away from view for many years to come. Catalogued and concealed in museum archive boxes. Held in trust for future scientists and future techniques which may tell us even more than the science of today. However, with the people of this village, the village on the river crossing, between the dark woods and the roads to the sea, there is only one option. Only one option that the modern village wants; and that is to bring them back here for reburial. To bring them home to the river valley, and the landscape that they'd undoubtedly still recognise as their own, and commit their remains once more to the earth.

Posted by Matt Champion at 22:41 No comments: