The Norfolk Medieval Graffiti Survey was established some years ago now and has come a long way since its tentative beginnings. It grew out of an  idea that came to me whilst working on the medieval wall paintings at Lakenheath church in Suffolk. Whilst overseeing the conservation of the paintings, and spending way too many hours in the church, I noticed that the church contained numerous graffiti inscriptions – some of which were clearly medieval in origin. I obviously wanted to know more.


The problem was that there didn’t appear to be a lot written about the subject. Only one full length work has been written so far on medieval graffiti – and that was first published over forty years ago. Violet Pritchard’s ‘English Medieval Graffiti’ was a great work of its time. Violet examined numerous churches, mainly around her Cambridge base, and made many amazing discoveries. However, as Violet herself admitted, the book had limitations. With Norfolk containing over 650 medieval churches her book mentioned only two as containing early graffiti. Given the number of churches in the county this seemed a very small amount indeed.


Luckily, my first port of call was to talk to fellow church enthusiast – John Peake of the Blakeney Area History Society. I knew that John had been looking at ship graffiti in the north Norfolk churches of Blakeney, Wiveton, Salthouse and Cley.  John kindly invited me to spend a day with him looking at the graffiti in those churches. What I didn’t realise at the time was that that day would end up altering the next few years of my life.


What John showed me was simply amazing and opened my eyes to a whole new area of medieval studies. Blakeney church, where we spent the morning, was simply covered in early graffiti inscriptions, several hundred at least. Wiveton was the same. The real surprise was that neither were listed in Pritchard’s book. John's work on the churches of the Glaven ports was eventually published as a chapter in 'Art, Faith and Place in East Anglia: from prehistory to the present' (Boydell 2012) .

Following the day spent with John I began to wonder if this phenomenon was actually far more widespread than I had at first thought. If it was fairly widespread then why wasn't anyone looking at it? So, torch in hand, I decided to go and look at a few churches at random and see what was there. 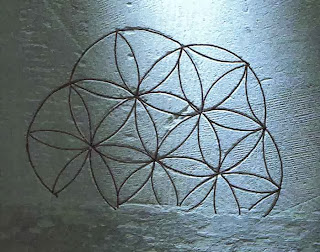 The first church I walked into was All Saints, Litcham. It would be wrong to say that I chose it entirely at random though. The church was already known to contain at least one medieval inscription, the ‘Litcham Cryptogram’, and I was wondering if this suggested other inscriptions might be present too? As it turned out Litcham church did indeed contain many hundreds of early graffiti inscriptions – hands, faces, demons, text and compass drawn designs – and was actually one of the busiest ‘graffiti churches’ in the county. I wasn’t to know that at the time – but I was hooked…
Posted by Matt Champion at 12:50