Although I spend most of my time looking for graffiti I suppose, for me at least, one of the most interesting things I come across really isn’t graffiti at all. Very occasionally, staring at a stone wall or the back of a rood screen, I come across something that I feel takes me perhaps closest to those people who actually built these elaborate and beautiful monuments to belief. The church builders themselves.
Architectural inscriptions are a rarity. There simply aren’t that many that survive. When we began the project the number of known architectural inscriptions surviving from the Middle Ages numbered less than twenty. The most famous of these, and widely documented, were those at places like York Minster and Wells Cathedral. Here the architects of the cathedral, or rather the master masons, had used deliberately prepared areas of the buildings as their design studios. These areas were most usually hidden away in places where the public could not go, and the work was undertaken on specifically prepared floors of plaster, known as ‘tracing floors’. Here they had worked out their designs, drawn up their templates, and created the blue prints for a monumental building that was to last for centuries to come. The tracing floor at York Minster looks today to be an architectural jumble of broken fragments of gothic architecture. Arches and curves intersect at obtuse angles, window fragments lie in the remains of a half century old arcade. However, these tracing floors were the real power-houses of medieval design. It is here that the master mason turned dreams and aspirations into a stone-built reality. 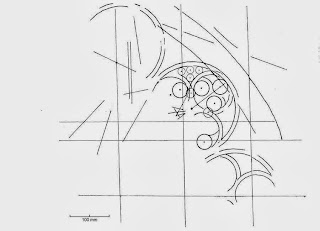 However, when it came to the more modest parish church, the master mason had none of the luxuries of a full scale tracing floor upon which to carve out his ambition. Many of the architectural designs I come across are far more modest in scale than those found at Wells or York. They are discretely located on flat pieces of wall, such as those found at Swannington, or located on the rear of rood screens, or the ends of benches. In retrospect it’s all rather obvious really. A workman arrives at a church to carry out building work and wants a nice flat surface to sketch out and plan his ideas. Why bother carrying a drawing board around with you when there’s the nice flat area on the back of the rood screen? Since the graffiti survey began we have actually doubled the number of these architectural inscriptions known to exist in the UK. 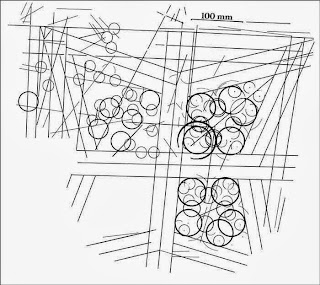 The first time I came across these architectural designs was in the very first weeks of the graffiti survey, at the beautiful and atmospheric Binham Priory in north Norfolk. For those who have never visited the site Binham is simply a joy. Today most of the site is in ruins, cared for by English Heritage and the Norfolk Archaeological Trust. However, the original nave of the priory church now acts as the local, rather grand, parish church. Although now sitting in a fairly remote spot a stone’s throw from the coast, Binham holds an important place in architectural history. The great west window of the church is regarded as the earliest example of gothic ‘bar tracery’ anywhere in England, built in about 1245 and pre-dating even Westminster Abbey by at least a decade. Prior to the introduction of bar tracery windows were built using a system called ‘plate tracery’, which in its simplest form was to just build a wall and cut a hole in it for the window. This meant that the designers were extremely limited as to how big they could make the windows without the entire wall collapsing. Bar tracery changed all that. The actually tracery stonework was designed to be structural and load bearing, allowing the creation of much larger and spectacular windows, and allowing light to flood into these buildings for the first time.
Although Binham is widely regarded as the very earliest example of this revolutionary new style in England, it has also become the centre of a sometimes heated debate between architectural historians as to just how revolutionary the west window was. The problem, you see, is that the window actually failed in the late 18th century and was bricked up. With only two earlier engravings of the window, both of which contradict the other, the argument has centred upon whether the window had four openings (four ‘lights’) or eight openings (eight ‘lights’). Although it sounds like a minor point to argue about it is, in terms of architectural history, a bit of a major controversy. Put simply, if it was a four light window then it can be regarded as simply an evolutionary step towards the style that was later perfected at sites such as Westminster Abbey. However, if the Binham window was of eight lights it can be seen as truly revolutionary. In recent years the eight light idea has taken a bit of a hammering, with one well known historian describing it as the ‘eight light myth’.
When I first began to look at Binham I was searching for the usual type of early graffiti that I’d found in the churches nearby. Ships, text inscriptions, compass drawn designs – just the usual. However, I noticed that certain areas of the walls were covered in very unusual lines and curves. These were on a far larger scale than anything I had come across earlier, being impossible to photograph using the usual raking light survey techniques. I was, in short, puzzled. It was really only on my third visit to the site that I gave them any real attention. One wall in particular appeared to show a real concentration of these markings. However, it was only when I looked closely at the very upper parts of the wall that I noticed that there was the clear remains of a quatrefoil which disappeared beneath fragments of a 14th century paint scheme. It suddenly became clear that I was looking at a very large scale architectural design. 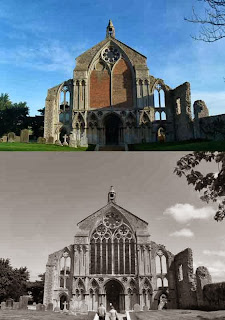 It turned out that this wasn’t the only one in the building. For some reason the master mason at Binham had chosen to use the walls of the existing church as his drawing board, and I clearly had the remains of at least five separate designs – one of which was over two metres tall. Although none of them were complete, and several were too fragmented to even record in any detail, it was clear that at least two of them related to the west front and the controversial tracery window. What’s more, the main inscription did appear to support the idea that the window itself, rather than being the four light evolutionary stepping stone was actually of a revolutionary eight light design. At the time I really didn’t understand the true significance of what I was looking at. What I did feel though was something of a connection with the man who made them. He had stood in the exact same spot that I was standing, facing the same piece of wall, and started an architectural revolution. Nearly eight centuries later I was staring at his working drawings - at the very place that this revolution in style, design and church building had began in England. It was a humbling experience.
Posted by Matt Champion at 13:09