Curses at the cathedral

Just over a week ago I had the great pleasure to take part in filming at Norwich cathedral for a piece in the BBC property programme ‘Escape to the Country’. Having not really seen the programme I was a little unsure when they first contacted me about why they would want to look at medieval graffiti as part of a property show. Was someone interested in buying the cathedral? Surely not. However, the producer explained that they had a couple who wanted to move to Norfolk (who wouldn’t?) and each episode normally contained a five minute piece with the presenter showcasing something unusual about the chosen area.  They’d heard about the cathedral graffiti and thought it sound just the sort of unusual thing they’d like to feature. Well, unusual is what I do – and sometimes the downright weird.


We met at the cathedral early on a brilliantly sunny Friday morning and had to make a quick start as the weather was set to deteriorate pretty quickly. The presenter for this particular episode was Jules Hudson, and I soon understood why they had chosen to come to the cathedral. Jules, it transpired, trained as an archaeologist at Durham and was pretty experienced at all types of survey work. Indeed, some of his earliest TV pieces had been with the early episodes of Time Team, several of which were shot in Norfolk. It was, therefore, a real change and a great pleasure to spend four hours showing Jules the graffiti treasures of Norwich cathedral. As well as doing the usual walking up and down talking to camera pieces (why do they always do this?) we had a chance to discuss some of the weirder aspects of the graffiti – and it was great to be able to bounce ideas off another archaeologist, but one who came very fresh to the experience. 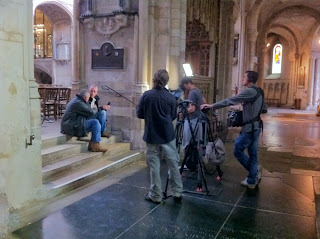 The graffiti of Norwich cathedral really is quite superb. We began the cathedral survey a little over a year ago now and I would say we are now over halfway through. It may sound as though we have been dragging our feet a little on this one, compared to our normal one day surveys of churches, but that simply isn’t the case. The cathedral contains many thousands of inscriptions. Exactly how many we simply aren’t sure of yet, but conservative estimates place it at between 2500 and 5000 separate inscriptions. The majority of these tend to date from the 17th through to the 19th century, but a significant proportion are clearly medieval in date.  Just about every type of graffiti is represented, with everything from medieval ships and prayers to animals and faces. However, the cathedral graffiti has also introduced us to an entirely new type of graffiti – the medieval curse inscription.


A high proportion of the inscriptions we come across are what is known as ‘apotropaic’ in nature. In essence these are ritual protection marks designed to ward off evil. At their simplest level they offer protection from the ‘evil eye’, whilst more complex types may have had a specific function – such as offering protection from demons. When I first began surveying for early graffiti I must admit to have been very wary of the whole concept of apotropaic markings. Archaeology is about ascertaining facts from the remains of material culture, and the whole area of apotropaic markings was just a little too close to things such as ‘folklore’ and ‘magic’ for my down to earth tastes. However, having surveyed over 250 churches I now find myself not only believing that such marks were meant to function in such a way – but actually looking at the thought processes and beliefs that lay behind them.

The main cathedral inscription took the form of the name ‘Keynfford’ (a Norwich family who appear in the Paston letters) linked to what appears to be an astrological symbol associated with the sun. However, the actual name had been inverted. Although such inscriptions would be instantly recognisable to anyone who has studied Roman or Anglo-Saxon religion as a ‘curse’, these were the first examples that we had identified in a direct late medieval setting. Having said that, there are a number of post-medieval examples that have been recorded, so perhaps we were simply seeing something that has continued for a very long time indeed.


What we discovered in Norwich cathedral appeared to function in pretty much the same way as the standard apotropaic markings – but reversed. Instead of trying to drive evil away these inscriptions appeared to have been an attempt to actually draw evil directly towards the individual named in the curse. Whoever inscribed this curse was clearly well used to writing, and had at least a basic understanding of astrology. The location of the Keynfford inscription was also pretty intriguing as it was located in an area of the cathedral to which public access would be very limited at the time of its creation. It all rather suggests that the Keynfford curse may well have been created by a member of the medieval religious community. Exactly what the Keynfford family did to annoy them we shall never know – but the curse has long outlived them.
Posted by Matt Champion at 10:21