Fear, love and worry on the walls

When studying graffiti inscriptions the most fascinating aspect of the whole process is not so much that you never know what you will find – but that you never know exactly where each new discovery will take you. I’m not really talking geography here, but more the spiritual landscape of medieval religion and the medieval mind. Whilst I do spend a great deal of time tracking through the highways and byways of the East Anglian landscape (and I hate the A47 as much as the next man) I seem to spend much more time, particularly in recent months, in tracking the beliefs and aspirations of the medieval world. Not just glimpsing the demons, but understanding the where, why and how of their very existence to the medieval congregation. It is dirty work – but someone has to do it.

If we accept the idea that much of the church graffiti we come across is devotional in nature, and I think we have to here, then the reasons behind its creation become the most fundamental of all questions. Otherwise it’s like looking at a copy of the Bible, recording where it is printed, how many pages it has, what typeface is used – but never bothering to read what is actually written. Now I’m not exactly the most religious of people. Even the kind hearted, on a good day with a following wind, might (just) describe me as vaguely spiritual – but beyond that they really wouldn’t go. However, it is the certainty of belief, the miracle of faith, which draws me further into trying to understand the mindset of the people who created these ‘prayers made solid in stone’. I suppose the old adage is true – and that opposites attract.
For me that is where the true fascination lies. Whilst it might be archaeologically useful to draw up a typology of compass drawn designs (it was a quiet afternoon and I thought they looked pretty) all that does is take something that was probably deeply spiritual and significant and turn it into something that we can classify and pigeon-hole. We strip it of the most fundamental of its aspects. Belief and faith. It is all about people.

I find myself still doing it all the time. Most recently, looking at certain of the compass drawn designs that I come across, I began to note that in certain churches very distinct distribution patterns had begun to emerge. A very good recent example was Swannington, where almost all of the compass drawn designs are to be found between the first two piers of the north arcade. Literally all facing in towards the same spot. I have seen this pattern in other churches as well, or at least patterns very much like it. It occurred to me that, as we see at places like Norwich cathedral, these particular inscriptions were being created in this particular space for a distinct reason. That space, between the piers, had a spiritual significance to those who created the inscriptions.
In the case of Swannington church I believe that the compass drawn designs all focus upon the spot where the font once stood. The font itself has been moved around the church several times in recent centuries alone, but that position in the north aisle was, at least in East Anglia, a traditional site for its location. Areas such as these within churches, where distinct distribution patterns could be identified, I termed ‘geographical hot-spots’ (we also have chronological hot spots as well).
Now if we accept the idea that many of these compass drawn designs were created as ritual protection marks, designed to ward off evil, then we begin to see a logical system of belief behind their placement around the area of the font. Any infant being brought into the church for baptism would have been considered vulnerable to evil and malign influence, prior to their officially being brought into the protective folds of Mother Church. In orthodox theology their souls would have been in peril until baptism had taken place, and the added protection of the compass drawn markings around the area that this ceremony took place is a rational and logical act – that can be positively identified in the archaeological record. The fact that many of these designs look to have been gone over time and time again, etching them deeply into the stonework, also suggests that they continued to have function to members of the congregation for many years afterwards.
However, it’s just not as simple as that. What I can rationalise and theorise about from an archaeological perspective was actually the action of a human being; as full of fears, love, worry and passion as every human being is. Those markings were put there not as a rational and logical act, but out of fear for their child, out of worry, out of love. They feared the darkness and the silence, feared what it could do to them and those that they loved, and would do all that they could to protect what they loved. Suddenly the rationalisations of an archaeologist seem so very inadequate. So unfit for the task. 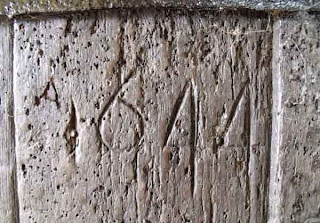 So what is left? Whilst we try and record the graffiti inscriptions in the parish churches of East Anglia we must never lose sight of the fact that these were created by real people who believed that they had a real function and purpose. They were important to them in ways that we can hardly imagine and can only just begin to speculate upon – and that they have continued to function in different way for the generations that have come after them. That, I suppose is the fundamental problem with the archaeological approach. We see it as the be all, and end all. The end of all things. However, the real key to understanding lies not with the inscription itself, but with the belief and emotion that placed it there, and the interaction it has had with those who came afterwards. A simple date carved into a church doorway is just that; a date. We can never know exactly why it was placed there at such a time. However, the real power of that inscription lies with the dozens of local people who, in the centuries that followed, ran their fingers across the inscription and wondered….
There I think lies the greatest and most beautiful of mysteries.