"If someone uses the term 'medieval Banksy' ever again..." - The value of medieval graffiti

This week I went back to Lidgate. A gloriously sunny morning negotiating the winding byways of the Newmarket heath, dodging the early Easter get-away traffic, eventually found me at the church with a few minutes to spare. It makes a change. My normal motto, according to those who deal with me on a regular basis, should be “24 hours late – but moving fast”. However, this time I was on time – give or take – which was useful as I’d arranged to meet others at the church to show them some examples of the amazing medieval graffiti.
My guests were a diverse collection of lecturers and post-grad students from the University of East Anglia – my own former university. Although I used to be fairly firmly attached to the university, having studied there, lectured there and acted as an extra-mural studies tutor, these days I rarely get to cross the hallowed concrete. Indeed, rumour has it that my presence on campus causes certain academics to run screaming from the area, and the assistant dean to spontaneously combust. It’s a knack I have. Or is it the assistant Dean who runs screaming and the academics that spontaneously combust? I forget…
For most of the UEA this was their first visit to Lidgate church. For almost all of them this was certainly their first field trip to hunt for medieval graffiti. They were all there to see a certain inscription; an inscription that has rather made a few headlines in recent weeks. What they wanted to see was the tiny a discrete line of text, etched lightly into one of the stone piers, that may, or may not, have been created by the late medieval poet John Lydgate. A simple enough thing to see. Over with in five minutes. Well, it would have been if I’d taken them straight to the inscription itself. However, that’s not my way. That would be wayyyy too easy. Now this wasn’t just me being a stroppy git (although that has been known to happen upon occasion I admit). What I wanted was for my visitors to understand that this was just one single inscription amongst many, and that it was impossible to understand any single inscription without seeing them as part of the whole. Putting it into a wider context so to speak. 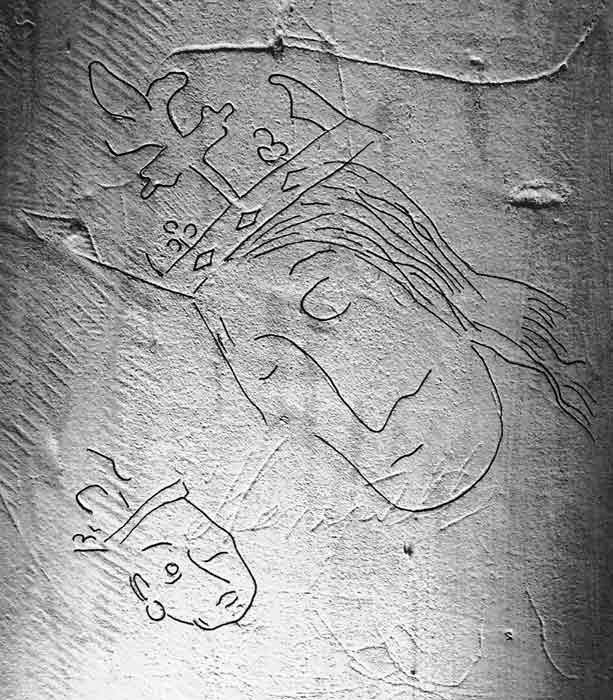 So I gave them the tour. Starting in the tower we looked at the bell ringer’s graffiti, the memorial to J. W. Wiseman who “departed this life” in 1810, and the inscription made by the “Jacob ringer” in the early 18th century. Then we looked at demons in the nave, compass drawn designs, windmills and medieval text across the walls. They saw faces, stars, music, names and dates. They crowded into pews to peer at the walls, squashed around piers and peered through gaps in the screens. Only then, about forty minutes later, did I show them the inscription that they had come to see… (I know – I am a bugger)
However, by the time they actually came to look at the possible Lydgate inscription something had happened to them. I saw it gradually spreading across their faces as we moved around the church, from inscription to inscription; something I am privileged to see on a fairly regular basis. A new understanding had been born. They suddenly ‘got’ medieval graffiti. They understood that is was about far more than scratched and idle doodles on the wall. That is went beyond our modern ideas of graffiti as destructive vandalism. Suddenly they saw the bigger picture. They saw that these markings had a meaning and function that, as medievalists, could help shed new light upon the world they studied.
Now I’m not claiming any great miracles here. I’m not suggesting that it changed the way in which they view the medieval church (although it did for me). All I am saying is that, for most of them I believe, they will never quite look at a medieval church in the same way. Their attitudes and perceptions had changed.
This change in attitudes and perception isn’t just confined to studying medieval graffiti. It is happening all around us all the time. You need only look at the current arguments surrounding the latest piece of Banksy art work to have been removed ‘for the sake of safety’ from the walls of Bristol. Now just think about that. A few years ago Banksy was widely seen as ‘just’ a graffiti artist – albeit a damned good one with a cutting edge wit and acute insights into the modern condition. His work popped up all over the place. Some loved it. Some hated it. Councils destroyed early examples and murals were painted over. However, here we are a few years later and his works sell for tens of thousands of pounds and critics talk of his work in terms of fine art. Works that would have once been painted out are now carefully removed and flogged off for a huge amount of cash by unscrupulous property owners. Others try to protect and preserve those Banksy pieces that are still on the walls, covering them in Perspex sheeting to ‘protect them’ from more graffiti ‘vandalism’. Protecting something that was once considered graffiti vandalism itself from further graffiti vandalism.  Do they see the irony do you think? 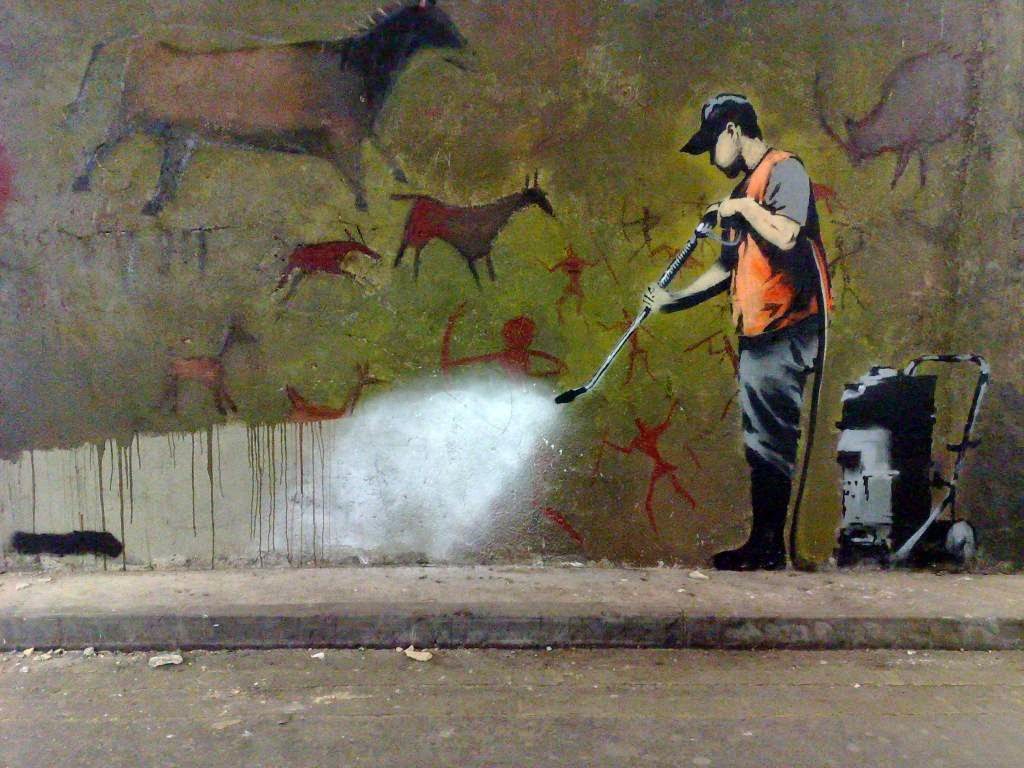 My point I suppose is this. In the same way that attitudes towards Banksy’s work have changed in the last few years, so too have attitudes towards medieval graffiti. It is gradual – but it is happening. We are moving away from the time when medieval graffiti studies were considered so far out on the fringes of academia that it was often only published alongside articles on folklore. We are moving towards a time when it sits, perhaps not in the mainstream, but at least alongside the main flow of research. Although this is incredibly good news for those of us that study it, it doesn’t come without dangers as well. We must remember that these markings that we study are not just another sterile collection of artefacts. That they are not another lifeless museum exhibit. As the group from UEA discovered at Lidgate, these inscriptions had both meaning and function to those who created them. They were spiritually important to them. In short, we must remember to place a real value on what we find on the walls; a value that can be measured in meaning rather than in pound coins.
Posted by Matt Champion at 10:19