The perfect picture: keeping your balls in the light...

I should be writing about ship graffiti right now. Yep, my favourite subject of the moment. The wonders of tiny inscribed ships sailing across the walls of our churches - just as they have been for long centuries. However, I'm not. I'm taking the evening off to have a really good whine instead. What's even better is that I'm going to share that whine with you all. I know, I know - no need to thank me - all part of the service...

Today has been a tiny little bit frustrating. Unsurprisingly a large part of that frustration was centred around computers. Now I'm not exactly known as the most technically literate of people. Indeed, until a few years ago my idea of reprogramming a computer involved the judicious use of extreme Anglo-Saxon threats - and an axe. In fact, the whole digital imagery thing came as something of a blow. Moving away from the dageurreotype and glass plate simply wasn't a natural progression as far as I was concerned. However, like all of us I have moved on a little. I have embraced new technology, am now surrounded by high tech digital cameras, laptops, desktops, tablets - and can almost use about half the functions on my phone. You see, I'm no philistine! That is until I come to graffiti hunting...

In the wide world of graffiti studies and church archaeology a new technology is emerging - Reflective Transformation Imaging - or RTI as it is more commonly known - and it is annoying the hell out of me! The system is actually pretty straightforward, and I should point out that it is a system that I DO use, which involves producing a composite image of an object in which, via the wonders of your home computer, you can actually alter the angle of light shining across the surface. What this means in practice is that you can sit at your desk staring at an image of a church wall covered in graffiti and then, much like you would on site, you can move the light source around to highlight different areas of the inscription. Sounds cool doesn't it? That's because it is. Really cool. Indeed, the public absolutely LOVE IT. Take along a laptop to an event with a few RTI files and they will spend hours looking at them, moving the angle of the light across the surface and going "oooeee". RTI is in fact a really wonderful tool for interpretation and outreach. 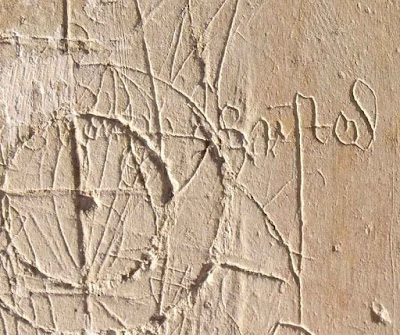 There you go, I've been nice about RTI. It won't last obviously.

The problem I have with RTI (actually I think we had better start using the term 'problems' rather than just the singular form here) is that it actually doesn't quite do what it says on the tin. In addition, despite the fact that the system doesn't quite do what everyone says it does, a very large number of technological minded archaeologists and academics are promoting the system as though it is going to revolutionise what we do. It isn't. Sorry! At least not yet.

Part of the problems is how you actually create the RTI files that the general public (yes, them again) so desperately love. The idea is that you use a fixed and immobile camera position in front of your object. Near your subject matter you then have a highly polished sphere on a stick - a globe that will reflect the angle that the light is coming from. Kits are available for about $350 - but you can also just use an old camera tripod, a polished billiard ball and a large wodge of blue tack (other brands of sticky blue/white stuff are available) - the choice is yours. You then take your high resolution photograph. Then, without moving the camera or the sphere, you move the light source and take another picture - gradually moving the light around a full arc as you take thirty of forty pics. Indeed, pretty much like we normally do when undertaking a traditional raking light survey.

Right, now here comes the science bit. All those images you have taken are now combined via a very useful bit of software to produce an RTI file - that can be viewed on an RTI viewer to keep the good old general public happy for hours. All sounds fine and dandy doesn't it. Fun for all the family.
However, any of my volunteers will already have spotted a slight flaw in the plan. To create each RTI file you need an awful lot of images - which takes a rather long time to do. You then have to spend quite a long time manipulating said images to transform them into an RTI file. Now if that one inscription is actually only one of three or four hundred in a church then, to be frank, we are probably going to be there for long enough to qualify for residential status. The other problem of course is image resolution. Undertaking a traditional raking light survey may well mean taking five or six images of the same inscription, all with different light sources, and with each image being at least five or six megabytes in size. If we took thirty or forty such high resolution images of a singe inscription and tried to combine them using the software then you end up with a rather large file size. In practice this doesn't happen. Speaking from experience any such attempt ends up with the software crashing, screaming abuse at you and shouting for its mum. As a result those actually making RTI files do tend to downsize their images so, instead of ending up with a three hundred and fifty megabyte file, they have a fifty megabyte file (many are smaller). As a result resolution is lost - and the great advantage that the system is meant to have of allowing you to sit at a desk and look at a high resolution 3D style image is also lost. 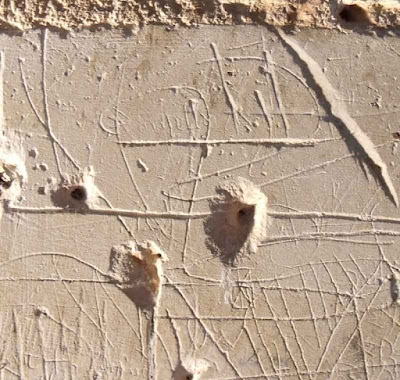 There are other problems with the system as well. The use of the spheres makes getting a really oblique angle across the surface with the light source actually impossible without either casting massive shadows across the inscription or losing the reflective point on the sphere. It also only really works for graffiti on relatively flat surfaces, something we don't see much of in the average church. I'd also respectfully suggest that a few of the people shouting about how good RTI is should learn how to take a decent old-fashioned raking light picture before playing with the technology. I could go on. I won't.

So, the system has a few faults? What new system doesn't? I'm sure that over the next few years many of these problems will be sorted out. I'm sure it will prove invaluable in many areas and might, perhaps, even aid in discovering something that raking light images couldn't find alone. The public will still love it, and it will look very flash when presenting at conference. It will, in short, be great.
So why am I whinging about it then? Well, to be honest, it isn't just the system I object to - but the way it is being promoted. The area of graffiti studies has over the last few years seen a wee bit of a revival. It has, I might venture to suggest, become a tiny bit fashionable (although anyone who has seen me might beg to differ). Suddenly universities and academics are seeing it as a legitimate area of study where a wealth of new material simply sits awaiting discovery. As a notable archaeologist said to me recently - it is simply "low hanging fruit". And come they are. Projects appearing every other week; projects that I welcome. However, a tiny minority of the people involved aren't terribly happy with how we've been conducting things over the last few years, seeing the 'everyman' approach to archaeology that involves a volunteer, a £9.99 torch and a camera phone as a wee bit unprofessional. RTI is, along with the technical language, a very easy was to distance themselves from the herd; to be 'scientific' about the subject. To be elitist about 'their' area of research - and that REALLY annoys the hell out of me - particularly when their actual results aren't really very good.

Right, I did warn you it was going to be a whinge. However, I feel I do have a valid point to make. What has happened over the last five years has seen a real democratisation of church archaeology that has made a real difference to the subject and, most of all, the people involved. Science DOES still need to catch up - and RTI will probably become a really useful tool in the future. However, certain parts of archaeology and academia also need to catch up - and that may take a while longer.

Note: a couple of people have asked me to elaborate upon the last point I made here. All I will say is this. There is, amongst a certain few academics, a tendency to equate complexity and over complication of a subject with an enhanced view of their own research and personal prestige. They are the ones who believe that describing what they do as "recording early ecclesiastical inscriptions using a Reflective Transformation Imaging 3D imaging system" will bring them more kudos than saying they "take pictures of church graffiti using a camera and torch"...