The invasion that never happened...

It is the evening of the 5th of June. The summer sun has barely dipped below the rim of the world and the glow still sits on the western horizon across East Anglia. Real darkness never comes at this time of year as the days merge quietly into one another with only the very briefest of respite.  In a few short hours it will be light again. A new day. A new dawn. Tonight is an evening of quiet peace across the countryside. Nothing much stirs. The air is clear, the wind has dropped and the breeze does little more than nudge the trees into a creeping ripple of movement, almost lost in the shadows. Sounds carry across the fields as a fox barks in the edge of woodland, and I can hear the seemingly weary cries of the oyster catchers skimming down by the river - refugees from the tourist covered coastline a few miles to the north. The distant revving of engines marks no great undertaking, beyond the boy-racer attempting to impress the unimpressed young woman - who is rather thinking that she should, against all her expectations, have actually listened to her parents.

Seventy years ago it was a different story. On the evening of the 5th of June the East Anglian countryside was awash with activity and the sky full of planes. One of the greatest military operations in the history of mankind was building up to a bloody climax that would break with the dawn. A dawn that would see either victory or defeat but, either way, would see the ending of countless young men’s lives. D-day, the allied invasion of mainland Europe, was underway. Bombers, gliders and fighter aircraft were strung out across East Anglian airfields awaiting permission to begin the largest air operation in history, launched in support of the largest seaborne invasion ever undertaken.  The sounds of engines drowned out the foxes calls. To most people the build up to invasion meant different things. An awareness of increased activity, and a hushed expectation that time was now too short for so many things.

Tomorrow morning my 13 year old son, proudly wearing his air cadets beret and his great-grandfather’s medals, will stand alongside his uncle, my little brother, and watch the sun come up over the Normandy beaches. They are there on a pilgrimage of sorts. A pilgrimage to honour those young men who never had the chance to become fathers, let alone great-grandfathers. They are there to pay their respects, to lay a wreath or two and, I hope, to understand just a little more about the sacrifices and determination that are required if freedom from tyranny is to mean more than a few empty words and political rhetoric. To pay their respects to the past. 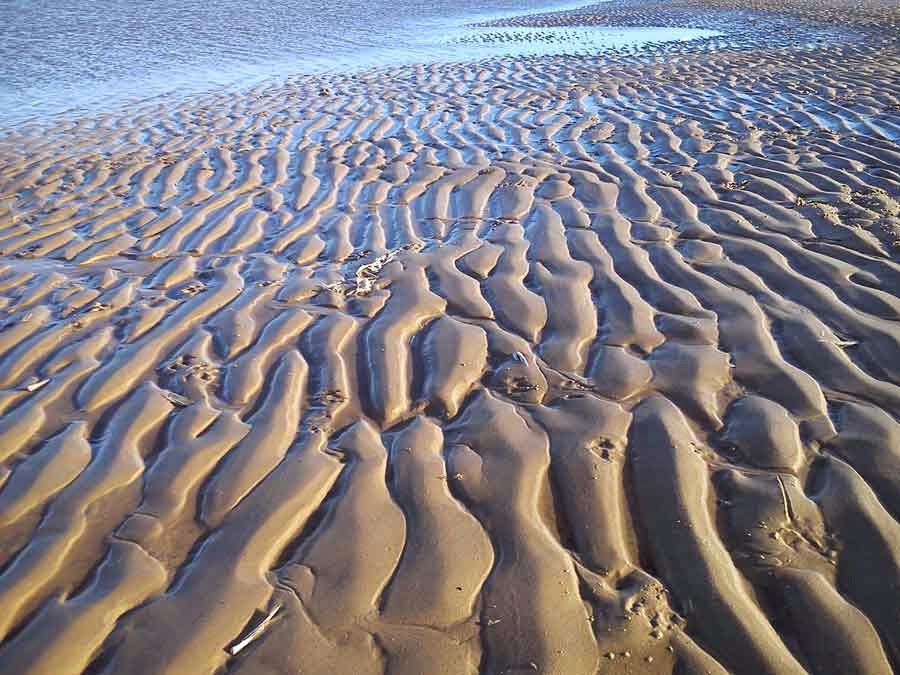 Last Friday evening I too came face to face with that determination. I met it, ran my fingers across its surface and smelt the stink of old, cold steel, ancient oil and centuries old timber. I was in the Suffolk village of Mendlesham to give a talk in the local church on the subject of medieval graffiti (no need to feign surprise). Mendlesham is an odd church, even by Suffolk’s eccentric standards. It is a rare gem that has had the benefit of the great love of generations lavished upon it. More recently is has been the decades old home for a very singular vicar. A man who loves the church - past, present and future. However, the real treasure of the church, a treasure that is a unique survival in England, was one that was safely lodged here for countless generations before the vicar assumed his post many decades ago.

In a small timber lined room above the porch, behind a thick iron-bound door, lies a secret. A secret the parish has kept largely to itself for countless generations. Here, in a small and ill lit chamber overlooking the churchyard, survives the only Tudor parish armoury anywhere in the country. From the wooden pegs in the walls, placed there over five centuries ago, hang suits of armour, helmets, powder flasks, the remains of muskets - and one of only four Elizabethan longbows to be found anywhere in this once longbow crowded island. 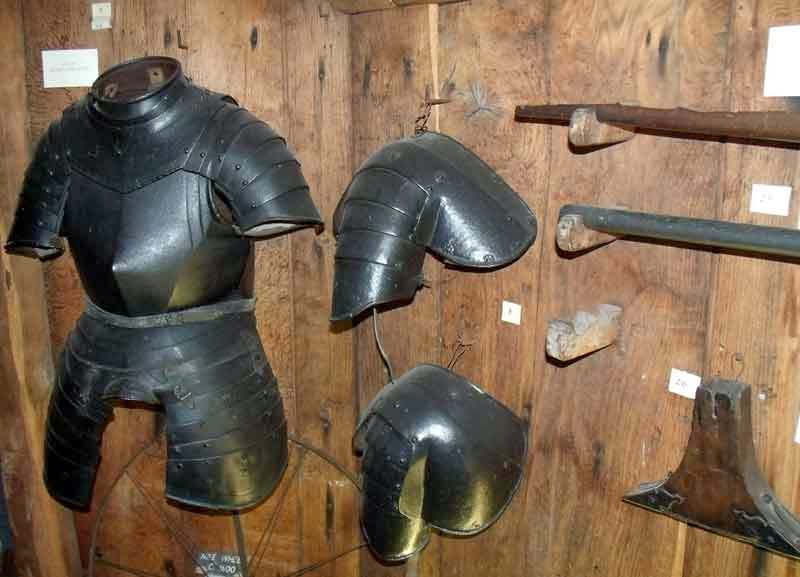 Parish armouries were once commonplace. Each parish was required to provide its own militia force, brought out for training on a regular basis, and to provide them with the basic arms and armour laid down in statute by monarch after monarch. They represented a last line of defence. A last line in the sand. In the event of foreign invasion, which was an all too present threat for Tudor England, this was the reality of home defence. Local lads in ill fitting armour, trained to a barely minimum standard, to stand up to the threatening hordes of Spanish veterans. Each parish keeping the tools of such defence locked safe and in good repair in their own parish armoury. Records of them are extensive. Accounts of the purchase of helmets and handguns, gunpowder and body armour, feature heavily in the documentary histories of the English parish.  Monies collected to pay for goods and monies expended to keep them in repair. They are a staple of anyone who spends their time, as I often do, searching through the medieval and Tudor parish records of England.  And yet, for all the paperwork they have left behind them, the armouries now are empty. The armour long since rusted away or sold off as scrap. The handguns, powder flasks and pike-shafts all succumbed to woodworm and the passing of the centuries. All except here – in this quiet corner of Suffolk. 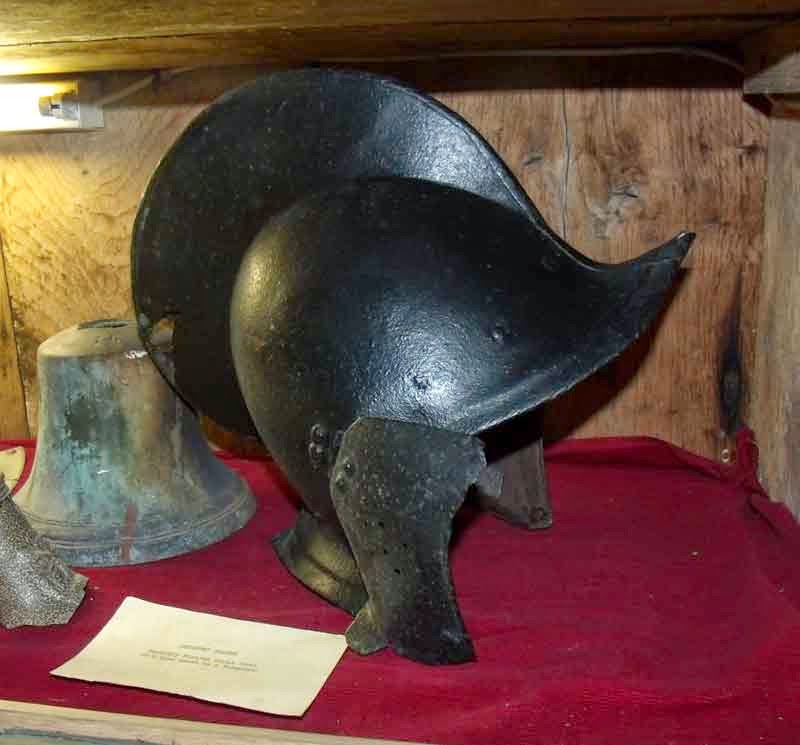 Around the walls of the Mendlesham armoury sit unique pieces of Tudor armour, enough to make most military historians dribble with envy. They are not great works of art, they are not the best that could be made – they are simply serviceable and good quality. The best the parish could afford to protect their own loved ones should that terrible day ever arrive when the armour would be donned in earnest. And come it did.
In the Summer of 1588 another great invasion fleet rode the waves of the English channel. However, unlike the mass of ships that spread out across the water in June 1944, this fleet was not heading towards the blood, sand and slaughter of Normandy – instead it was heading towards England. The Armada of Philip of Spain was the largest seaborne invasion fleet that had, until that time, been seen in Western Europe. An undertaking on a massive scale to bring rebellious little England into line with the religion of the Catholic Church. A crusade to bring redemption and salvation to the heathen English. Under threat of invasion the parishes of the south and east of England were mobilised. The men of Mendlesham, along with all the neighbouring parishes, drew together and donned their armour, gathered their muskets, cleaned their swords – and marched off to face a threat that would, in all likelihood, result in their own deaths. 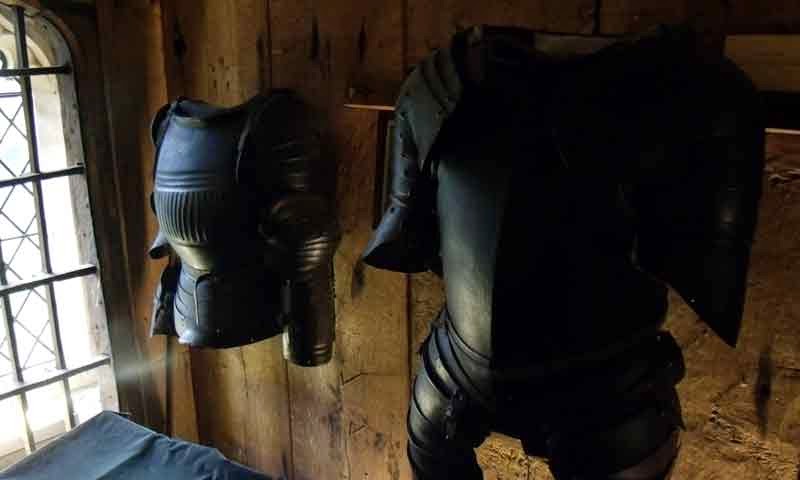 As all the history books tell us, things turned out rather differently. The Spanish invasion fleet never reached these shores, beaten by the weather, bad planning and the bloody-minded English sailors who harried them up the channel. God blew and they were scattered. And so, along with neighbours, friends and family, the men of Mendlesham eventually marched back to their homes and hearths – to hang their armour back on the pegs in the little timber lined room above the church porch. And there it hangs still. Generations have passed - and yet there it remains. A fragment of a memory of less stable times. A relic of an invasion that never came and a war that was never fought.
It will, I dearly hope, remain there for centuries yet to come. A relic of a bygone age that faced the same hopes and fears that we too face today.  And as the sun comes up tomorrow morning over the beaches of Normandy I hope that, like the men of Mendlesham, my 13 year old son will never have to face the same challenges and threats that our little island has faced before. I hope that, like the armour that hangs above the porch, he too will never be called up to test his steel against war, invasion and the chaos of bloodshed. And unlike many thousands of those who launched themselves from boats and landing craft onto the so foreign, yet so familiar, beaches of France – that he will come safe home.
This story shall the good man teach his son…