It's already mid October, Halloween is just around the corner, plague doctor masks are outselling just about every other costume on the internet, and my inbox is filling up once again. No, that isn't a euphemism. Stop smirking. 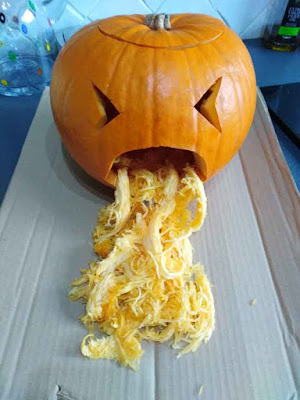 At this time of year the subject line of most of the emails is pretty much guaranteed to read 'witch marks', or some variant upon it. The tabloid media wanting images or, more usually, emails from the public wanting to know if the strange markings they have found on their house are indeed 'witch marks'. Firstly, I have to state that all the emails are welcome - unless they are from the Daily Mail obviously. They can go and do one. I try to reply to all the messages - eventually - and give an indication of the meaning of the markings they've discovered. At the very least it may heighten their interest in, and understanding of, their own house. They may look at it in a different light, and think about the generations who have called it home for centuries before they were born.

However, the replies always begin the same way.

"Many thanks for the message and attached images ('and apologies for the delay in reply to you' - optional depending upon how busy a month it has been). We tend not to use the term 'witch mark' these days, as it is both misleading and factually incorrect. The term itself was invented by a journalist only a couple of decades ago, and is sadly one we don't seem to be able to shake off. An actual 'witch mark' is the marking found upon the body of a witch (third nipple etc), that was thought to be the physical manifestation of their pact with the devil.

The markings in the images you sent are today more usually known as 'apotropaic' marks, or 'ritual protection marks', and in parts of northern Europe they are still called 'holy signs' - which is perhaps an altogether more descriptive name. The marks themselves have no direct links to witches, and were thought to ward off evil spirits and malign influences. Most of them have their origins in the imagery of the medieval church, and can best be thought of as 'anti-witch marks'." This is usually followed by a reading list.

Never let it be said that my replies don't give good value for money...

The thing is, nine times out of ten, the images I get sent aren't ritual protection marks at all. Anything but in fact. On a fairly regular basis I still receive images showing a large, deeply cut, 'broad arrow' design, which still appears to mystify a lot of people. These are usually the easiest to explain, as they are Ordnance Survey Benchmarks - the marks created by the good people of the Ordnance Survey to act as datum point when undertaking map-making surveys. They are usually to be found on permanent structures, such as churches or houses, and are nationwide, so it is easy to understand why people may be curious about them. You can read more about them here - https://www.ordnancesurvey.co.uk/benchmarks/

However, almost all the other images I get sent (those that are in focus enough to see anything at all) are most usually 'Carpenters Marks'. You can almost feel the disappointment as they read my reply, and I do feel a bit sorry for them sometimes. It's like kicking a puppy. Not ritual, or protective, in any way. However, these marking are - I try and tell them enthusiastically - incredibly useful to a buildings archaeologist! They can tell us just SO MUCH about a building's construction history! In many ways they are EVEN BETTER than ritual protection marks!

They rarely fall for it obviously...

So what exactly are Carpenter's Marks? Well, it is all pretty straightforward really (this is a convenient lie). These are the marks made during the construction process of a timber building. The carpenter's would build their timber frame, and cut all their joints, most usually on the ground in an area sometimes known as a 'framing yard' - just to make sure it all fitted together perfectly. They would then mark each timber and joint with an individual marking - one on each of the timbers that formed the joint - so you would end up with a pair of markings. In this way they could ensure that when it was all taken apart again, and reassembled in its final position, everything ended up where it should be. Joint A to Joint A, joint B to joint B - just like a giant model kit. 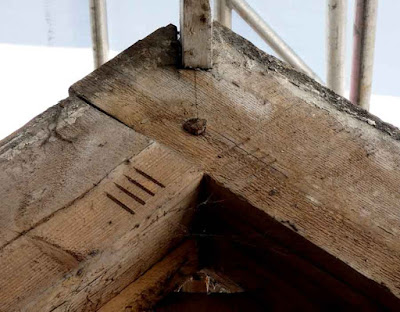 On stone or brick buildings they tend to be confined to the roof structure, or floor frames, but they can also be found on partition walls or similar. On fully timber framed buildings they are likely to be everywhere. They can also take a wide variety of forms, some being scratched, others cut neatly with chisels, and there are no completely set patterns - just some things that are commoner than others. 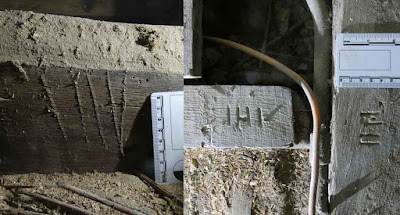 Most usually the early examples are loosely based upon Roman numerals - XII, VIII, IX, etc - as these are easily made using a chisel. However, there are a few examples known about where Arabic numerals were used - even quite early on. The markings also often follow a numerical sequence, so you can actually work out which end a house was built from by working from the lower numbers towards the higher ones across the structure. 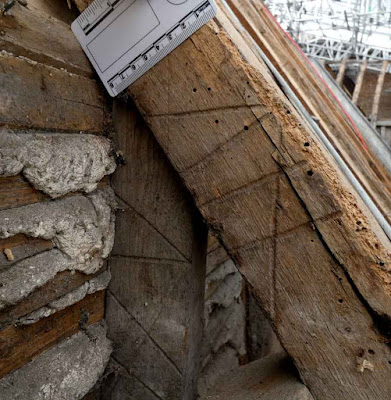 Having said that, if you go hunting for these marks don't expect to find nice neat Roman numerals all over your roof timbers. When I said they were often 'loosely' based on Roman numerals I really did mean loosely. At a recent survey of a sixteenth century floor frame at Oxburgh hall in Norfolk I recorded a lovely set of carpenter's marks that were set as typical Roman numerals. That is until you came to number nine, which instead of marking as IX (which can be mistaken for XI when viewed upside-down), they had substituted it with a broad arrow marking. Very much a case of 'this way up'. 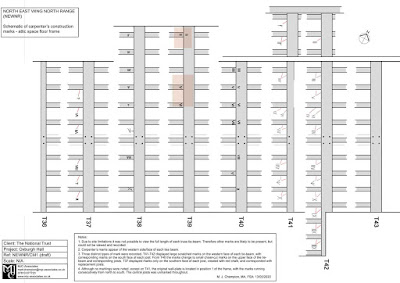 In a symmetrical building, where the same joints appear on opposite sides of the frame, you will sometimes find that one side displays carpenter's marks in the form of Roman numerals, whilst the opposite side will have the same numerals, but each with an extra little 'tag'. A way of differencing the left from the right of the frame, or the front from the back. 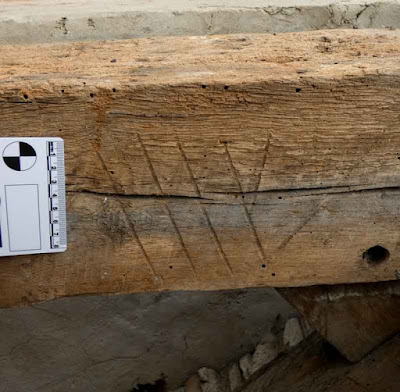 You also quite commonly get examples that are a mixture of lines and circles - the circles being created with a carpenter's raze knife - and these are the ones most likely to get mistaken for ritual protection marks, even by some supposed 'experts'. And then there are the really rare markings. Those marks that appear to be confined to a single building, and have yet to be discovered anywhere else. Returning to Oxburgh hall again, a small number of the surviving medieval rafters of the western range - dating to somewhere between 1437 and 1463 - are marked with a semi-circular punch or moulding chisel. One punch for rafter one, two for rafter two, and so on. 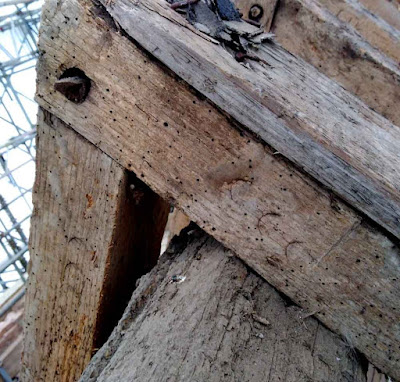 Okay. So not quite as straightforward as I may have suggested a few paragraphs ago, but hopefully you get the idea. 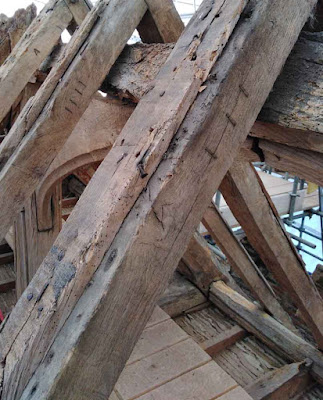 And I wasn't exaggerating when I said that these markings are incredibly useful to a buildings archaeologist. Ritual marks may be a bit of a giggle at Halloween, but carpenter's marks are where the real fun is at. As mentioned above, they can give you a chronology for how a house was actually built - what came first, and how the builders tackled the project. They can even tell you a bit about the carpenters themselves. Are they the same type of mark throughout, or are multiple carpenters working on the project? They can even tell you quite a lot about what has happened since the house was first built. Are the markings all still in situ, and in the right order, or has the structure been altered, re-ordered, or repaired. They are, as you can see, incredibly useful little marks.

So this Halloween, whilst everyone is going on about bloody 'witch marks', spare a thought for the humble carpenter's marks. The marks left by honest craftsmen as their construction blueprints, and their own modest legacy to history.