So all the signals are telling me that Halloween must be fast approaching. How can I tell, you might well ask? Is it the sudden proliferation of bright orange and totally inedible pumpkins wherever you look? Perhaps it's the sudden filling of every available supermarket shelf with cheap bags of high-sugar-content snacks and sweets - only available in day-glow colours and in sizes that scream 'MEGA', 'BARGAIN' and 'Fun-Sized'. Could it perhaps be the grins on the faces of the manufacturers of cheap glow-in-the-dark costumes, designed to last for one evening only, and invariably shed more glitter around the house than you thought humanly possible? All subtle hints that Halloween might be approaching it must be said. However, for me, the sign that Halloween is upon us once more is the sudden deluge of media enquiries and requests for images. interviews and articles on... yep, you guessed it, 'Witch Marks'.*

In the last few years it would appear that the linking of witch marks and Halloween has become almost as commonplace as Christmas and Coke adverts, Boxing Day and the DFS sales. They have become the fallback of any journalist who wants a bit of a heritage twist to a story, and can't find a good killer clown exclusive. They'll be the usual 'Witch Marks Discovered in (insert building here)' story. The heritage organisation asking the public to 'Record their own Witch Marks'. The tabloid double page exclusive on how 'Immigrants stole my Witch Marks', or how 'Hexfoils mean Hexfoils' (nope, I've no idea what that means either - but it looked really good when I wrote it...)

However, the thing is, that Witch Marks, otherwise known as 'Ritual Protection Marks', have absolutely nothing to do with witches per se, and certainly nothing at all to do with Halloween.

Ritual Protection Marks are symbols that were applied to buildings and objects, and were deemed to be 'apotropaic' in nature (it's from the Greek - go look it up). In essence, they add a layer of spiritual protection to a physical object, and are designed to 'ward off' evil. In some respects it can be easiest to think of them as acting as the opposite of a curse. Whereas a curse is designed to bring down misfortune, a Ritual Protection Mark was designed to do just the opposite - and keep an object, space or individuals safe from harm. Exactly what the harm these marks protected you from is open to question. In many cases it appears to be a non-specific evil, such as the ever-present 'Evil Eye', in others there are clear links to the activities of Demons, whilst certain symbols in certain specific locations 'may' have been to deter the activity of witches.

The ancient origins of many of these symbols are very unclear, and there is most certainly evidence that their meaning and function changed or evolved over time. Take for example the 'Hexfoil', one of the most common type of compass drawn designs that we come across amongst medieval church graffiti. Some claim, albeit without much in the way of evidence it must be said, that the symbol was originally a symbol associated with the sun. What we can say for certain is that, during the Roman period, the symbol was in popular usage - and it is the single most common symbol found amongst the ancient graffiti at sites such as Pompeii and Herculaneum. Exactly what it's meaning was to the Romans is unclear, but from its usage on items such as altar stones it most certainly appears to have had a spiritual significance. What is also not disputed is that, by the late Anglo-Saxon and early Norman period, the very same symbol had become very clearly linked with the Christian rite of baptism, with the hexfoil motif being the most common single symbol found on early fonts in English churches.

It also appears that this early association with baptism, and perhaps the spiritual safeguarding of the font and the infants baptised within, continued well into the later Middle Ages. In terms of church graffiti there are a number of sites where mass concentrations of compass drawn designs are to be found solely in the area around the font, and in cases like Bedingham, Wighton and Tittleshall (all Norfolk) where the designs have been etched into the font itself. In the post-medieval period these designs continue in use, and commonly appear in a domestic setting. Whilst it's often said that they are generally located around entranceways to a structure, such as doors and fireplaces, lending protection to areas that might be considered 'vulnerable' to evil, there is virtually no surface or object to which they were not applied. Furniture, in the form of chests, coffers and beds, were liberally decorated with these designs - echoing what we see on parish chests with the medieval church - and where early plaster survives in a structure then they can be found there too.

And they continue in use long, long after the more general fear of witchcraft had all but died out (except in Suffolk obviously... but they've always been a bit odd) - and once again their meaning and function appears to evolve. Whilst they are still regarded as symbols of protection, any direct links with formal religion and baptism appear to vanish, leaving them just to be regarded as symbols to 'avert evil' or even simply bring good luck. It can even be argued that their continued use owes more to habit and tradition than to a belief in any spiritual protection they might offer. 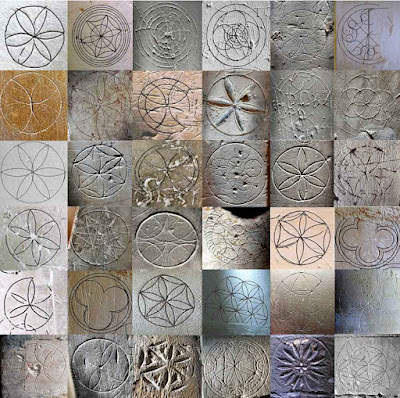 The other thing about these markings, at least many of the more common examples such as the 'VV' symbol, is that it is pretty easy for the inexperienced to mistakenly identify other types of graffiti as witch marks. The VV symbol does, after all, look pretty much like a 'W' - which as all good children know, is one of the most common initials used until very recent centuries. It turns up a lot.  It's therefore all too easy for inexperienced students to get all over excited about Victorian tourist graffiti in the mistaken belief that they are some form of witch mark. The usual give away of course  is the presence of other initials. If it says 'W C' - it should usually just be flushed down the pan of graffiti research.

And then of course there is context. Context in any archaeological investigation is important. Context is everything. Therefore, if you come across a 'VV' symbol on a bottle of wine in Tesco, the chances are it isn't a witch mark. A really useful example for the unwary to bear in mind is somewhere like Creswell Crags in Derbyshire. The cave walls are literally covered in graffiti, and there are certainly a lot of 'VV' symbols present, but none of these have been shown to be anything other than relatively modern tourist graffiti. Again context is key. 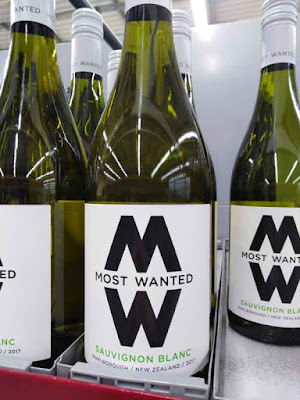 The caves themselves came to the attention of archaeologists in the late nineteenth century, when they realised that they contained evidence of early human activity, and a large number of fossilised animal bones. To extract this valuable information the archaeologists had to conduct excavations on what, even for the times, was a quite monumental scale. The caves were filled with thousands of years of rubble, debris and soil, all of which had to be removed. In the case of Robin Hood Cave the debris filled the chamber to within a few feet of the roof - to a depth of eight or nine feet. Eight or nine feet of debris that completely covered the walls, therefore making it impossible for anyone, from the last ice age until circa 1865, to leave their mark.

What is very obvious is that all these ritual protection marks have a long history of belief and use associated with them - stretching back over two thousand years in some cases. They didn't always mean the same thing, they weren't always used in the same way, but they continued in use as 'spiritually significant' motifs. Some of them, such as the 'VV' symbol, crossed over into more orthodox usage within the lexicon of church symbolism, whilst others, such as the early christian symbol of the pentangle, fell away to become only associated with the 'dark side' - much to the love of young Goths and manufacturers of cheap silver jewellery everywhere. However, the fact that they were such a universal belief throughout the Middle Ages and beyond means that we cannot treat them lightly. They were the physical symbols of people's belief and fears. They marked the boundary between the everyday reality of the physical world, and the potential harms and evils of the realm of spirits. In some cases they were the first line, perhaps even the only line, of defence against the unexpected, the malign and the malignant.

*and if you think I get grumpy about Halloween - just wait until Christmas...