Welcome to Suffolk... almost as strange as Norfolk

Well it had to happen really. It was just a matter of time. Not content with tackling 650 churches in Norfolk we have now officially expanded the graffiti survey in to the glorious county of Suffolk (or Greater Norfolk as it will henceforth be known). Joking aside (I was joking?) the county of Suffolk has a superb collection of medieval churches that have already proved to contain large quantities of early graffiti. Between them the two counties have over 1100 medieval churches and are so very similar in terms of architecture, style and history that it seemed silly to let a mere geographical boundary get in the way of bringing together a truly meaningful statistical sample. So we didn’t. Indeed the two counties are so alike that it is rumoured that the natives sometimes marry and inter-breed – although not necessarily in that order.

Actually, the expansion of the survey into Suffolk is largely down to one individual. Although she will remain nameless, this particular diminutive volunteer has taken the Suffolk survey bit between the teeth and already personally surveyed over 100 churches in the county. She is, to put it bluntly, a tiny graffiti inspired whirlwind. Oh, and she takes superb pictures too.
Beginning the Suffolk survey has also presented us with a few opportunities. As many of you will already know the establishment of the Norfolk survey happened more by happy accident than design. It has grown and evolved as it went along, and continues to evolve on an almost monthly basis. However, with Suffolk we have been able to plan things a little (only a little) better. We are already talking to education providers to establish links with students and are working with local and regional archaeology and history organisations, such as the Council for British Archaeology’s East Anglian group, to maximise the benefits for both archaeology and volunteers. We hope that this will ensure the establishment of a strong and sustainable model that can be replicated in many other counties (except Essex – we are not going there – just don’t ask). 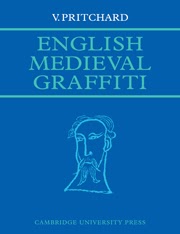 The establishment of the Suffolk survey has also given us the opportunity to examine and re-evaluate much of the earlier work undertaken on medieval graffiti in the 20th century. The only full length work ever published on the subject, English Medieval Graffiti by Violet Pritchard, was first issued nearly half a century ago. Although Pritchard dealt very lightly indeed with Norfolk, highlighting only two churches, she did look at a far larger number of Suffolk churches.  At the time the only survey techniques available were the time consuming and laborious practice of making individual rubbings of each inscription. The results were mixed. The Suffolk survey is being undertaken using digital photography and specialist lighting – allowing the same inscriptions to be photographed repeatedly under very different light conditions. By initially looking at exactly the same churches as examined by Pritchard it has become very clear that, in most cases, there are far more inscriptions present than initially thought. Lightly inscribed marks that would be impossible to record using the rubbing technique become clear using digital imagery. In short, there’s a lot more out there to record and new surprises and discoveries await us upon the walls.
You can find out more about the Suffolk survey by visiting the new project website www.medieval-graffiti-suffolk.co.uk or follow the project on twitter @suffolkgraffiti