One of the fundamental problems with searching for early graffiti inscriptions is that they are actually pretty difficult to see. Actually, many of them are really, really difficult to see. A lightly scratched line in pale stonework can, in normal lighting conditions, be almost invisible. It is only by shining a light across the surface at a very oblique angle, known as a raking light survey, that these lines and inscriptions suddenly become visible, with the shadows casting them into vivid contrast. It is the fact that these inscriptions have been all but invisible for the last few centuries that has led to them being largely overlooked as a medieval resource. However, this invisibility may well have also been responsible for their survival. What was invisible to the church ‘restorers’ of the 19th century tended to escape their loving attention.

In some respects this has led to a general misconception concerning these early graffiti inscriptions. Because they are difficult to make out today many people assume that this was the case when they were first made. They then, applying the twisted logic of misconception to the case, assumed that they were always ‘meant’ to be hidden away, to be something located in dark corners of the church, and that they were, like modern graffiti, seen as unacceptable or anti-social. Acts of vandalism. However, this just doesn’t appear to be the case.
The one thing you have to remember about English churches in the later Middle Ages, most particularly those in East Anglia, is that they would have mostly looked very, very different from the way they look today. The bleak and lime-washed walls that we see today would originally have been a riot of colour, with wall paintings and pigment covering just about every surface. High on the church walls would have been the images of the saints, the elegant depictions of parables and protection giving St Christopher. Above the chancel arch would have been the Doom painting, with one side showing the souls of the saved being lifted to heaven and the other showing the souls of the damned cast down into hell (always a good few tonsured heads or Bishop’s mitres amongst them). However, we also know that even the lower walls of the church, and the piers, would often be painted as well. 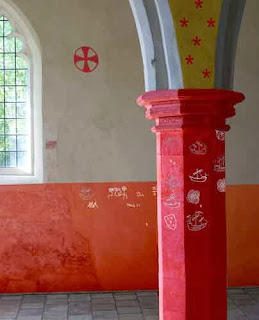 These lower areas of the walls weren’t really suitable for elaborate images. The damp rising up and down the stonework, as wet season changed to dry, would have made the images friable and fragile – prone to be rubbed off by any passing sleeve or doublet. Instead they were often painted with a plain pigment. Just a single colour. At places like Weston Longville the analysis of the lower parts of the nave walls reveals that they were repainted on numerous occasions – red ochres, blacks, yellow ochres – layer upon layer. The graffiti inscriptions in the church were often within these lower areas of the walls, below the formal paint schemes, and were actually incised through these layers of pigment to reveal the pale stone beneath. As a result the graffiti inscriptions, far from being hidden away in dark corners of the church, would have been one of the most obvious things you noticed upon entering the building. 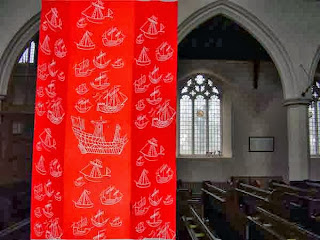 This of course has a number of quite far reaching implications for how we think about the graffiti inscriptions. The ship graffiti at St Nicholas, Blakeney, is a perfect example. Here we have a pillar literally covered in graffiti, opposite a side altar, and close inspection of the pier base shows that it was once painted a deep red colour. The ship graffiti was created over a two hundred year period, at least, and each respects the space of those around it. It must, therefore, be assumed that the earlier inscriptions were visible to those who create the later inscriptions. This suggests that these little ship inscriptions, etched through the red pigment, were clearly on show for at least two centuries. During that time they weren’t defaced, they weren’t covered over – they were in fact respected by those who came after them. The parish priest, should he have so wished, could have had them covered over, painted out, erased – but it would appear that he didn’t. The implication is, that on at least a local level, these inscriptions of ship graffiti were both accepted and acceptable. The same is likely to have been true of many of the other graffiti inscriptions. They may not have been part of the orthodox teachings of the Church, but they were most certainly an accepted part of local belief and religious practice. The only dark corners they inhabited were those of the parishioner’s souls.
Posted by Matt Champion at 08:18