Marking the stones: medieval mason's and a bunch of bankers...

The marks left by medieval mason's are invariably the very earliest markings that can be found on any medieval structure, and can tell us a great detail concerning the medieval design and construction process. The traditional view of mason's marks is somewhat simplistic, albeit useful in terms of interpretation, and states that each mason who worked on a structure had their own individual symbol with which they would mark the individual stones, or area of the building, that they had worked on. These marks were then used by their employer or the 'master mason' to work out exactly who had done which piece of work, and how much each mason was to be paid. Although useful, such a narrative is both overly simplistic and in many cases just plain incorrect. Wrong. However, if it helps you to think of them in this way then please feel free to do so. You'll be wrong, but have a nice cosy warm feeling inside - which has to be worth something after all.

There are three main types of mason's marks that can be found on medieval stonework, all relating to different types of stonework and construction techniques.

Banker's/Quarry marks
These are the marks applied by the lower standard masons who were simply roughing out the stones for use in the walls of a building. The masons doing this work may have been apprentices, but just as likely were skilled men used to working large stones very quickly. In some cases, particularly where the majority of the stone was locally sourced, these marks may have been applied as the stones were quarried and cut to rough size - or could have been applied after they were cut to exact size in the mason's lodge on site. Such marks are usually fairly large in comparison to internal mason's marks. They are fairly crudely formed, but created using mason's chisels or punches, and in shape often take the form of a crude representation of mason's tools, such as the set square The fact that many of these marks often appear at angles, or even upside down, indicate that the marks were applied to the stones prior to them being inserted in the wall. 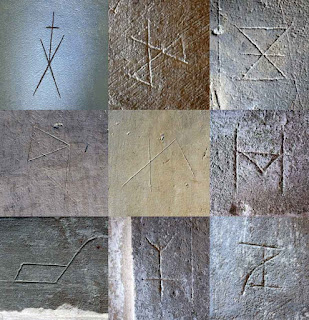 The presence of lots of these banker marks at a site is usually an indication that the rough masons were being paid on a piece work rate; a set rate for every finished stone. However, at many sites existing documentation suggests that individual masons could and were paid by the yard of finished stone. A surviving document for work at Lincoln cathedral in 1308, made between the cathedral administration and the mason Richard of Stow, indicate two different rates of payment - one for plain walling and the other for carved work. Those undertaking the more skilled carved work were paid a daily wage, whilst the less skilled 'walling masons', were paid by the amount of work they produced. If the rough masons were paid by the yard then there was no need for them to mark so many stones, just to indicate the general areas in which they worked - and less banker marks will be visible.
Fine mason's marks

The second type of mason's mark most usually encountered are those located on the higher status fine stonework. These were made by the expert masons undertaking the detailed carving and forming of the moulded stonework, such as arcades, fine finished walls or moulded stones. Such markings are invariable smaller and more precisely cut that the banker marks found on the general walling stone, and are usually formed of straight lines cut with a selection of mason's chisels. As a general rule, if it isn't precisely cut with a chisel - it isn't a mason's mark - no matter what some archaic Victorian text book may tell you. Not chisel cut - NOT A MASON'S MARK. Are we all clear on that bit?

Many examples show evidence of having been created in situ once a particular piece of work was completed. In this respect the finer mason's marks can also be seen as  a form of quality control mark, being applied to an area of work upon satisfactory completion of the set task. In normal circumstances only one mason's mark would appear on a single stone - but there are recorded exceptions to this. Exactly why this is the case I am happy to report - we don't actually know as yet. A master and apprentice perhaps? Really friendly mason's who shared their work? No idea as yet - and it is REALLY rare.  In contrast to modern masons, who hide their own marks on the rear of stones or within bedding joints, the medieval masons had no qualms about leaving their marks in plain view on the surface of the stones - a practice that is believed to have changed only in the seventeenth century. It is generally understood that the mason's were less concerned with their marks being on the visible face of the stone as the surface was most usually then painted or decorated, which would have obscured the markings. 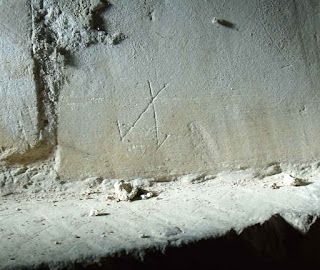 Tradition also states that each mason had his own mark which he would use throughout his career, and in some cases would 'pass on' the mark to an apprentice or son. However, this interpretation is not really standing up to scrutiny (a rather polite academic term for stating that it is complete bo**oxs). There are certainly cases of the same mark appearing on buildings constructed several centuries apart, which obviously led to the idea of generations of the same family continuing a tradition. Either that, or we had some REALLY old masons. However, with there only being so many different marks that can be made using straight lines and a set of chisels, duplication over time is pretty much inevitable. There is also very clear evidence of masons changing their marks for particular projects, most probably the result of two or more masons being contracted for a job and discovering they have very similar marks. Therefore, just because it is the same mark on two structures doesn't mean it is the same mason.

There is also the traditional idea that the mason's mark was meant to operate as some form of tally system, allowing the master mason to work out who had done what work, and therefore what they were to be paid. Leaving aside the fact that it would have been a pretty poor master mason who didn't know what each of the half dozen masons under his control was actually working on, this interpretation also fails to explain the marks found at numerous sites. Whilst some churches might have as many as half a dozen different mason's marks (and worth bearing in mind here that the whole of Bodiam castle appears to have been constructed by only nine masons and their apprentices in under a decade) others are found to contain many dozens of marks - that are all identical. How is that meant to work then? The mason is marking his stones to prove he did the work - when he's the only one employed there? I think not. 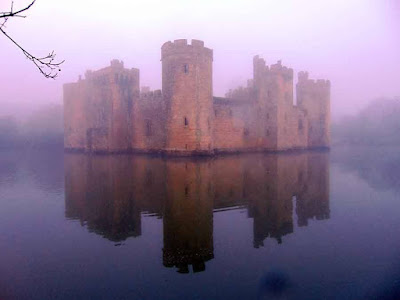 So what are mason's marks for then? Well, put simply, a number of things. In some cases they probably are actually being used to mark out an area where a specific mason worked, but this most likely has little to do with how much he was getting paid - unless it's a banker mark. Instead they were applied to finished pieces of work, in some cases as a form of quality control, marking out an area that was 'completed'. In others it appears to be a craftsman signing off his own work, in the same way a proud artist signs his own masterpieces. In many instances it is a combination of things - the end of a section, a quality control mark AND the mark of a proud mason. Put simply - there isn't a simple single answer.

However, and this is where it might just get a tad confusing, some masons used as their marks symbols that have become associated with apotropaic functions, or ritual protection marks; in particular here I am talking about the VV symbol and the pentangle. Yes, these marks are undoubtedly ritual protection marks - but they are also used as mason's marks. Just because you find a structure covered in pentangles or VV marks doesn't necessarily mean they are witch marks. It is a little more subtle than that. A little more nuanced. If they are repeated throughout a structure, as at churches like Loddon in Norfolk, and if they are chisel cut in a neat and precise manner - then they are MASON'S MARKS. Now here's the thing, just to really annoy you, it is worth bearing in mind that the masons may have chosen those particular marks simply because of their recognised protective function... 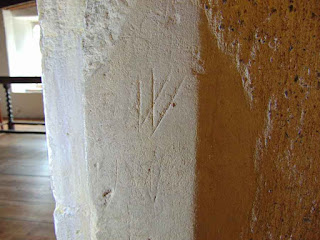 And then there are the third type of mason's mark - those created by the Master Mason.... but I think I'll leave that for another time...

So, when looking at/for mason's marks here are a few simple rules to bear in mind...

Rule 2 - just because you see the same mark on two different buildings does NOT necessarily mean they are the mark of the same mason.

Rule 3 - just because it looks like a witch mark doesn't mean that it can't be a mason's mark.