A plague on both your houses: scratching lost souls into the woodwork...

In terms of church graffiti the most obviously non-religious symbols we come across is the 'Merchants Mark' - a device or motif supposedly unique to an individual merchant that acted in much the same way as a logo does for a modern company. A symbol that was easily recognised by both the literate and illiterate alike, and one that was associated with one particular merchant. Merchants used these marks to mark their goods, to sign documents and even to adorn their houses. For those that made it in to the ranks of the very rich these same marks are found adoring their own memorial brasses or alabaster tombs. A small but proud mark of the humble trading origins of a merchant of note. They were, in effect, a type of heraldry for those of too low a class to be entitled to have their own coat of arms. Until very recently it was believed that all these symbols were most probably related to individual merchants or trades people. Each mark may perhaps have been passed down a generation or two, with minor changes and differences, but they still related to an individual, family or merchant dynasty. However, recent discoveries at a number of sites have meant that the traditional view is now open to question.

To anybody visiting Carlisle Cathedral today the most notable point of interest, which will undoubtedly be pointed out by one of the well informed volunteer guides, is the runic inscription located near the south door. One of two such inscriptions in the building, the other being high up and not on public display, it is now safely protected behind a glass frame. However, if you take a short walk in to the choir of the cathedral you will soon come across some other inscriptions that are certainly just as interesting, and potentially just as significant. Here, carved into the woodwork of a very fine set of late medieval stalls, complete with the most wonderful (and sometimes disturbing) misericords, can be seen one of the most extensive collections of merchants marks anywhere in England. All of them appear to date to the very last years of the sixteenth century, a time when Carlisle was an important regional trade centre near to the English Scottish border, and most of the marks date to either 1591 or 1597. What is extraordinary about them is that, although most of them are of slightly different dates, and all of them carry differing sets of initials, they all have the same, or almost identical, merchants marks at the centre. 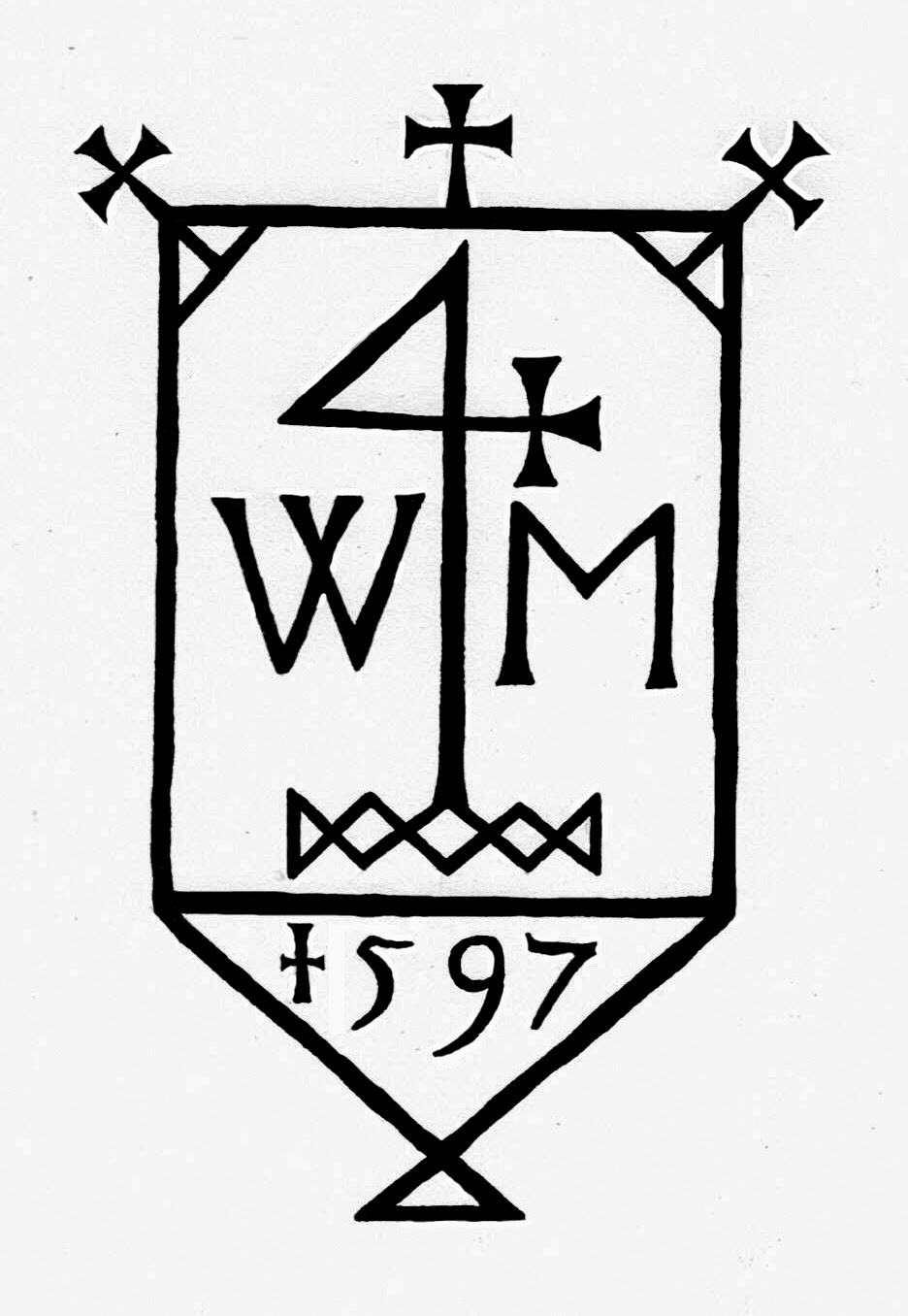 The Carlisle merchants marks are intriguing. Over a dozen distinct and separate marks, all with the same symbol at the centre, but different sets of initials, and mainly dating from the years 1591 and 1597. Although they certainly look like merchant's marks found elsewhere it would appear that they are probably not. Merchant's marks were meant to be easily recognisable, allowing people to quickly identify the person they related to. The fact that these marks all look basically the same would suggest that these had another purpose entirely. This isn't just a problem that relates to Carlisle alone. In many other churches and cathedrals what appears to be the same mark is repeated many times, either with or without initials, and the same marks can be seen in churches scattered across an area or region. The fact that so many of these marks were almost identical, therefore rather defeating the object of a merchant's mark in the first place, was even noted by F. A. Girling writing upon the subject back in the 1960s as something that he could not easily account for.

It is much more likely that these markings all relate to these individuals membership of a common organisation, most likely a trade guild of some sort; and that the central symbol is in fact the mark of that specific guild. Such trade guilds were the social and economic backbone of most medieval and Tudor towns. They drew their members from specific traders, such as the glovers, merchants or butchers, and would have regulated the trade activities within the town, acted as a quality control board and even regulated prices. In addition these guilds also had a social role, settling disputes between members, helping those who became too sick to work and even assuring a decent turn out in the event of a guild members funeral. Before the reformation many of these organisations operated as supposedly religious guilds, supporting activities in their parish church and often contributing quite large sums of money to the maintenance of certain church altars or parish lights. However, these overtly religious guilds were swept away during the Edwardian reformation in the middle decades of the sixteenth century. Some were dissolved, their goods either taken by the crown or illegally redistributed locally, whilst others simply changed their names and structure to continue much as they had done before.

Late sixteenth century Carlisle is known to have been home to eight major guilds - the merchants, butchers, skinners, shoemakers, tanners, tailor, smiths and weavers - all of whom met at the Guildhall in the city, which still survives to this day. It would appear likely that this particular symbol repeated across the choir stalls of the cathedral was actually the symbol of one of these guilds, although we may never know precisely which one, and that the letters are the initials of individual members. What then is the significance of the two dates - 1591 and 1597? With respect to the 1591 date, which is the least common on the carvings, no specific link is known. The 1590s were not a happy time in England generally, with continuing foreign entanglements acting as a drain on manpower and a number of exceptionally bad harvests making famine a very real possibility on several occasions. However, we do know that 1597 was a particularly significant year for Carlisle and the surrounding area; a bad year that has gone down in history as one of the most dreadful on record for those living in the north west. 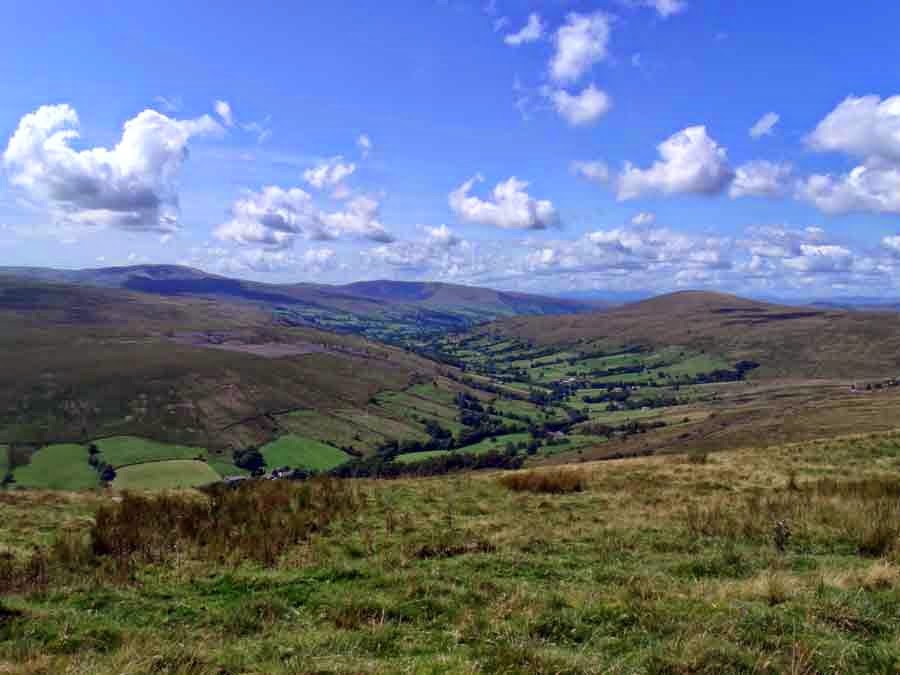 Early in 1597 the first victims of dreadful plague were reported in the Richmond area of North Yorkshire, and within a few weeks this epidemic had exploded westwards along the dales, leaving in its wake a trail of bereavement and empty small holdings. The casualties, even by plague standards, were astronomically high and its spread was sudden and erratic. That autumn the disease hit the towns of Kendal, Penrith and Carlisle almost simultaneously, with devastating results. In Penrith over six hundred souls, nearly half the population, were dead in the matter of a few months; with bodies quickly buried in hastily dug graves, local authority at the point of collapse and houses lying empty. It was the same story in the city of Carlisle itself. Local records for the period are unsurprisingly incomplete, but suggest an epidemic that outstripped even the Black Death of the mid thirteenth century in its speed and ferocity, leading some modern biologists to actually rule out bubonic plague as the culprit. Although nobody can as yet be entirely certain exactly what this disease was, with Anthrax even being seriously considered at one point, it was most certainly the most virulent disease to have ever hit Carlisle, and as the autumn moved in to winter the city began to suffer.

The city authorities did their very utmost to halt the spread of the disease and limit its impact, but with varying degrees of success. The city all but sealed itself off from the outside world, ejecting vagrants and strangers from the gates and refusing entry to those who came from areas where the plague was already known to be. Infected households were placed under a strict quarantine and bodies were quickly removed from houses where all had perished, leaving city employees to cleanse the dwellings as best they could to try and prevent further infection. Regular inspections of households were instituted, to try and identify those who might be suffering from the illness, and isolation hostels were established outside the city walls. The city also instituted a poor relief fund, to help those who simply couldn't help themselves, and made sure that medical treatment was free for those who couldn't afford to pay for it. The richer townsfolk were also called upon to support the city authorities in their efforts, and the city council made funds available from the city chest - but all sadly to little avail. Modern studies suggest that the incubation period of this particular disease, whatever it may have been, was relatively long; meaning that by the time the city had put measures in place to stop its spread it was already too late. Their walls had been breached many weeks beforehand. A census of the townspeople taken in late December, before the plague had really started to bite, shows that, of the 323 households in the city, 242 were reported as being infected - with 149 deaths already having taken place. As the winter dragged on the death toll grew. 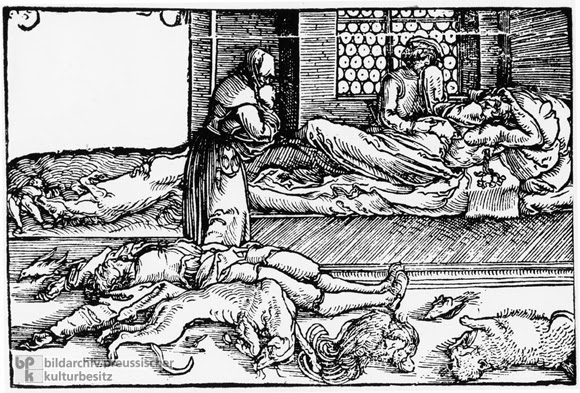 There is no consensus on the exact number of deaths that took place in Carlisle during the last months of 1597. The city's population is believed to have been somewhere in the region of 1300 souls, and a plaque in Penrith church which states that 1196 people died in Carlisle is most certainly an overestimate. The real figures were undoubtedly lower, and some records suggest that recovery from the disease was not entirely unheard of, but it appears likely that the winter of 1597 saw the deaths of about 40% of the city's inhabitants - at the very least. Perhaps then this is the answer to the puzzle of the merchant's marks all bearing that date in Carlisle cathedral? If these carvings are meant to represent individual members of one of the city guilds then perhaps they relate to this period when death stalked the streets of the city? A time when the role of a guild, to support individual members in life and to ensure their respectful and honoured passing from the world, simply wouldn't have been possible. A time when bodies were quickly removed to hastily dug graves that would leave no time for ceremony, no time for remembrance and no time for memorials. Are these then the memorials to those guild members who, in the dark and cold of the winter of 1597, were caught in the claws of a plague that was stripping their city to the bare bones? Their fellow guild members, shuttered in the dark cathedral and awaiting either death or salvation, carving their friends initials in to the oak of the choir stalls, to stand testament forevermore.


http://www.amazon.co.uk/Medieval-Graffiti-Voices-Britains-Churches/dp/009196041X
Posted by Matt Champion at 21:21