Welcome to the second of our Guest Blogs on the subject of "What history/heritage means to me". This week's beautiful contribution is from Norfolk based @jessikart. Jess has been very, very firm about what I am, and am not, allowed to write when describing her and her writing. For instance, I am, under no circumstances, allowed to mention the fact that her own blog has been viewed over 60,000 times. I'm certainly not allowed to tell you that she has guest blogged for Mumsnet, or that her blog appears regularly on the front page of their website. I'm also strictly forbidden from mentioning the fact that her blog pieces have been picked up by regional newspapers, or mention her now infamous blog post concerning Ed Balls...
So what am I allowed to say? Not a lot. I can say that Jess is a recent volunteer with the Norfolk Medieval Graffiti Survey, where she not only helps undertake surveys but also advises and helps on matters concerning publications, and that her own version of a biography read - "Jess is a history obsessed moo, a twatty blogger, and a right pain in the arse for some. She can be quite sweary. Has Scottish hair..."

That Little Ship... by @jessikart 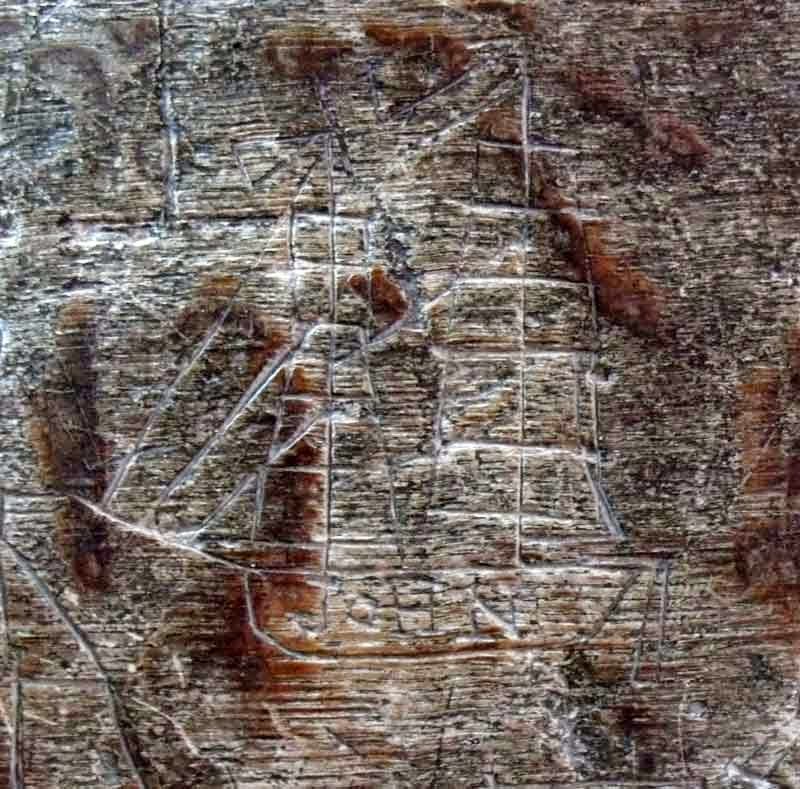 Look at that. It’s not much, is it? But that ship, that tiny little etching changed my life. This is, from my point of view, in equal parts both terrifying and hilarious.

Almost exactly 25 years ago, I was on holiday in the north Norfolk village of Salthouse. I was bored, lonely, the weather was grotty, there was no possibility of taking a walk that day, so 10 year old me decided to explore St Nicholas church instead, standing high on a hill at the end of our lane. I mooched about inside aimlessly, half looking around at the memorials and windows, but finding nothing to dispel my ennui. I clambered into the choir stalls, trailing a pudgy hand behind me along the wood. And I felt something.

And that was it. A ship. More ships. A whole fleet of ships. And initials too, and dates, and all sorts of odd things. But why ships? I stood, and I stared, and my head swam slightly as the world rushed in at me, and I realised that I wasn’t the only one who had been here. I know that sounds stupid, but history had never occurred to me like that. History had never been about people.
History was dates, facts, books. Kings, queens, military campaigns. Not people like me. Not people who did anything other than die a long time ago. But the realisation that they too had their own futile hopes, silent dreams, and secret wishes.  And time… They had their own lifetime, just like me and everyone I knew. That thunderclap awakening still haunts me now, with the power to bring me to tears.*

*Yes, fuck off; I did type that through tears and snot

Because it did change my life. In the same way that staring up at the stars in the night sky is both a comfort and a chilling reminder of how utterly insignificant we are. It's a reminder that I wasn't here for a long time, I'm here now, but then I won't be. I’d love to say that since that moment, I have always considered history in this context. But that would be a big hairy arsed lie. Because that’s not how history is taught to young and enquiring minds. It’s almost as though some people don’t want to share history. They don’t want people to care about it in that sense. They want it to be dates, facts, books.

History… is a nightmare from which I am trying to awaken

Not too hard, if I’m honest. A Level British Political History, last lesson on a Friday afternoon, hiding at the back of an overheated and stuffy Edwardian classroom. Listening to Mr John drone on, seemingly endlessly, about Corn Laws. With my cheek resting on the heel of my hand, my pen strokes becoming ever slower, elbow sliding further along the desk, chin dipping lower, blinks lasting longer…

‘And of course, who was one of the greatest advocates for repeal… Jess?

‘Correct. Now, the House of Commons had suggested the price per quarter, which as you know was 480lb, should be 80 shillings…’

The lowlevel background speech dragged on for a further 40 minutes until we had a ten minute break in the middle of the lesson. I’d huddle outside the Sixth Form common room, drinking a chemical coffee from the vending machine, smoking a fag. And sometimes I’d have a companion, and we’d chat and get wankily enthusiastic about 19th Century art, music, architecture. About how the current events of then shaped and influenced life for everyone, and how this was reflected. We’d talk about patronage and protest, why Shelley  wrote ‘I met Murder on the way, he had a face like Castlereagh’, about the Tolpuddle martyrs, about what certain laws meant to people, real people, how it shaped their lives. And then the bell would ring, Mr John would sigh and say ‘You haven’t handed in that essay on Catholic Emancipation, don’t think I’d forgotten’ as he and I walked back into class, and I would resume my great fight against falling asleep in a lesson taught by a man who shared my passion for history.

You could sense the palpable frustration in him. That he wanted, desperately, to show his students that history wasn’t as he was teaching it. That this is the dry bit of the subject, but there is so much more. That the facts are inextricably intertwined with lives, with people, with meaning and feeling. Confined to a syllabus, however, he couldn’t convey that.  And when the school decided to crack down on the shocking practise of teachers joining sixth formers for a fag break, our chats stopped, and history became closed off to me. I half forgot Salthouse, and the whiplash memory was dulled. History became the very thing I didn’t want it to be. Dates, facts, books.

And then just over a year ago… it was a dark and stormy night (no, really). I was titting about on twitter, probably making inappropriate remarks, and a blogpost got retweeted into my feed. And I read it. And just like the oncoming storm, Salthouse raced back in at me. Or rather, the ships sailed back into view, filling the horizon, their decks filled with the shadowy ghosts of all the people who had been there before me. Long before that bored and lonely girl happened upon them, they had been there too, just like me.

It didn’t matter to me that I’ll never know their names, their ages, what lives of quiet desperation they lived. Who they loved and were loved by. That’s their story that no one else will ever know. What mattered to me is that something mattered to them. That they were compelled, at some point in time to leave their trace behind, to make their mark on history. Something was important to them, and for that reason, it’s important to me.

It’s not just the deliberate marks either. A worn down staircase in Gressenhall workhouse. A reminder of thousands of feet, an accumulation of steps wearing down the stone with no malice, no intent, just effect. 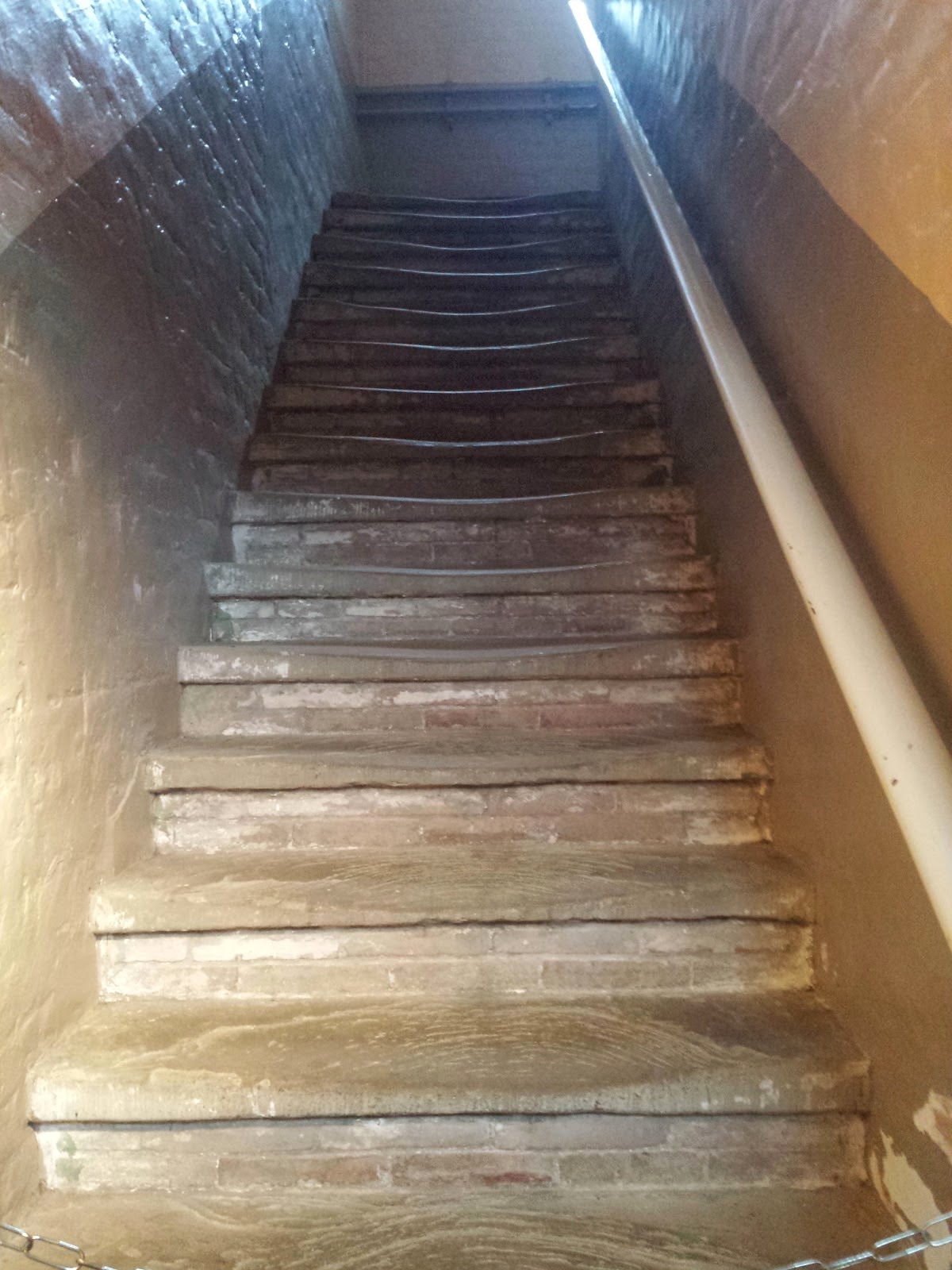 A rippled, bent tin door of a Spanish church, the heat of the sun warping the original design, the metal thinned and smoothed by the many hands that have touched it, surrounded by ancient walls flecked with shelling and scorchmarks from the Civil War. 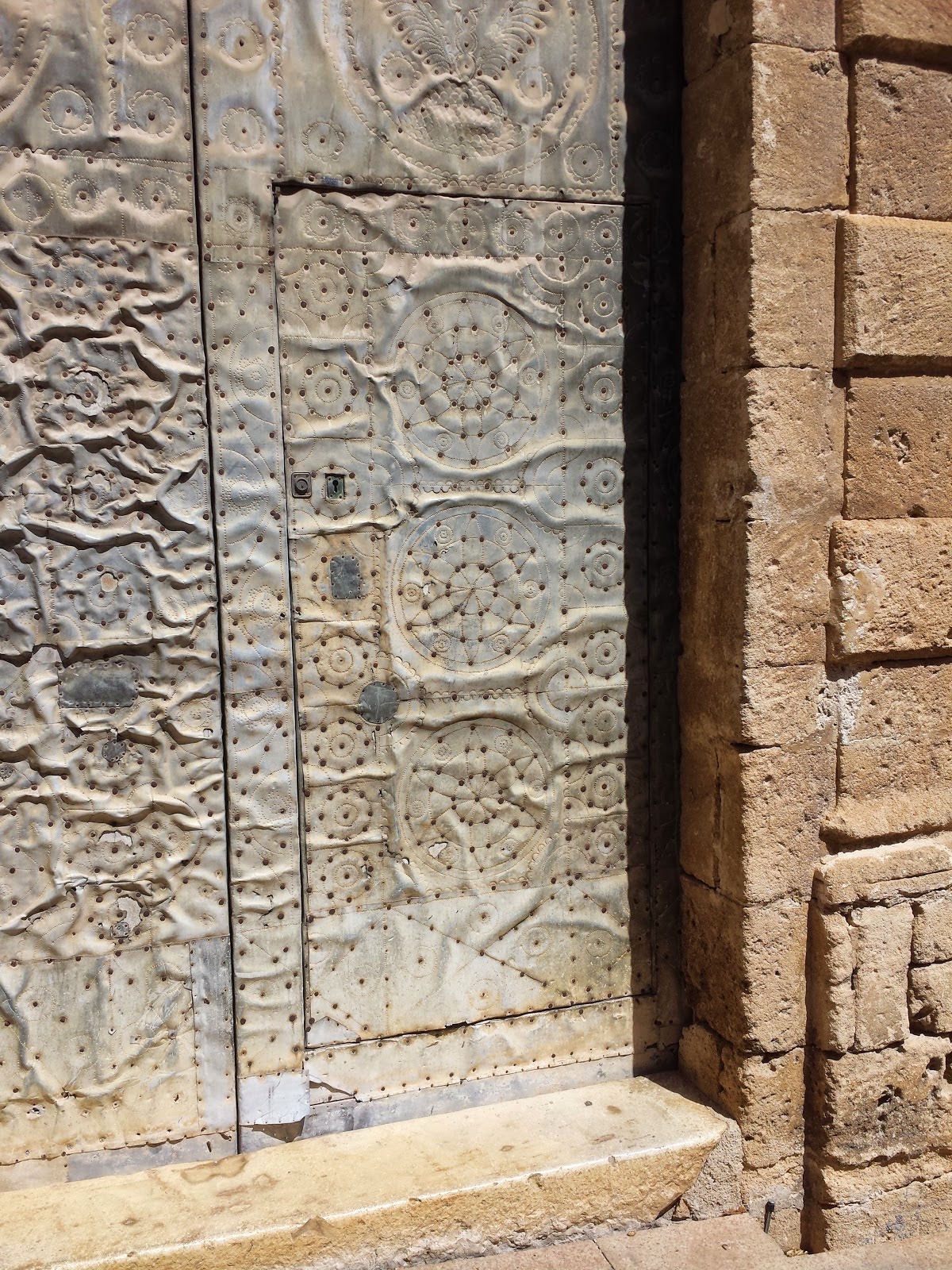 The ruins at Baconsthorpe. How many other people have stood, where my two children stood, and taken in that same landscape, lost in thought, or perhaps talking, or arguing, or weeping? Maybe not even looking at it, as familiarity dulls the senses. 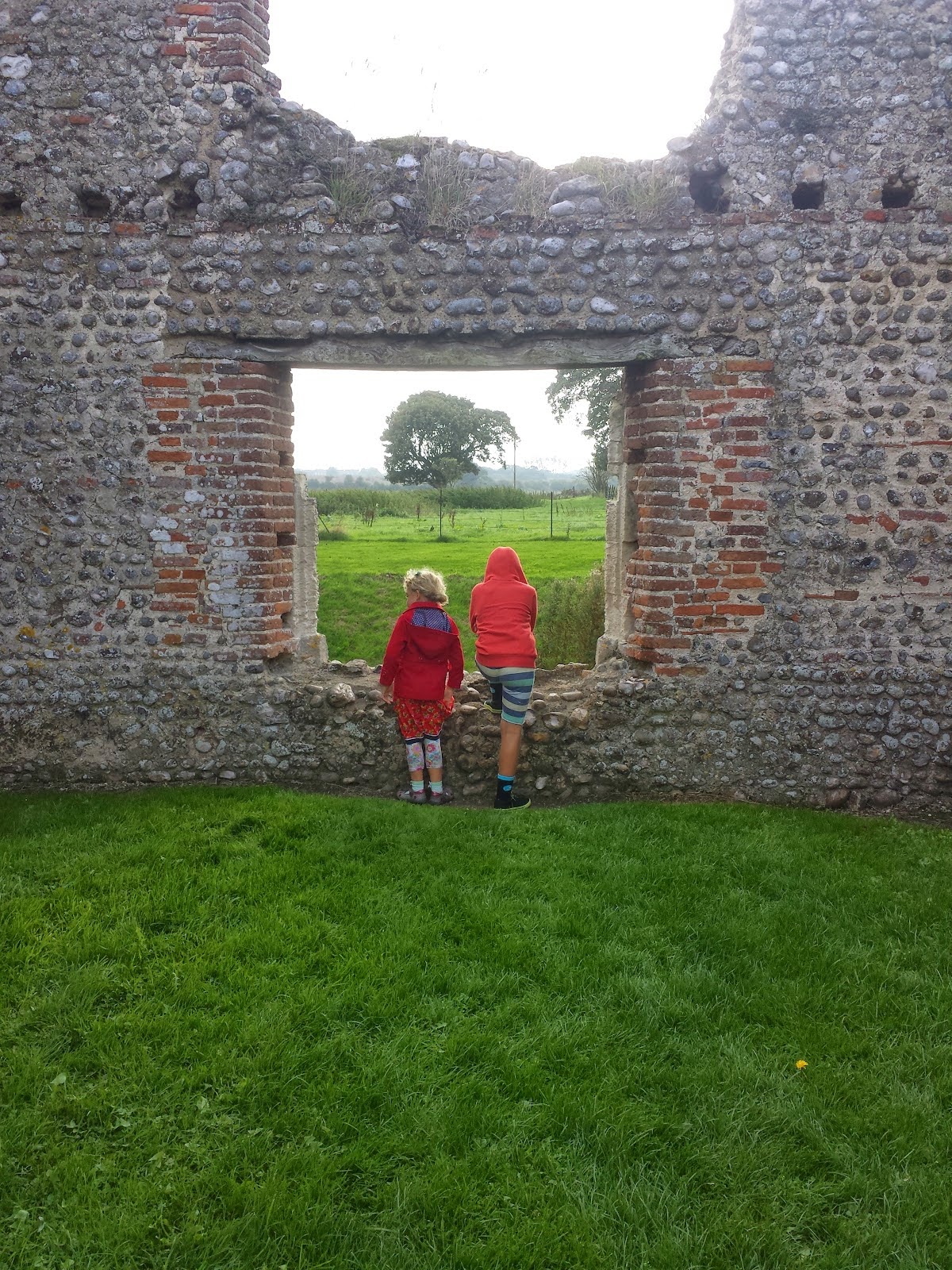 This, all of it, every little detail, is what reminds me that just as I am both the hero and villain of my life story, so is and was every person who has ever drawn breath. Their lives mattered to them, they were just as important as we are, and equally just as insignificant. We’re born, we live, we die. But we leave fragments behind. Little clues as to who and what we were. That is what history means to me. People. And people continue to be a source of fascination to me – some might even say the source of fascination in my life. Endlessly wonderful, frustrating, beautiful, base human beings. I observe them; I think about them, I write about them. And from writing, some of the best things in my life* have happened, things without which, I don’t know where I would be or the type of life I would have.