Last week was an unusual week as far as graffiti hunting goes. Most of my time is spent hunting around medieval churches for early graffiti. Not a problem as far as I’m concerned. A bit chilly at this time of year – but by no means a problem. However, I do also undertake commercial graffiti surveys of other historic sites. These are a wonderful opportunity to look at graffiti inscriptions from a little further afield and to examine graffiti from other time periods. A very useful exercise. It’s taken me to some very strange places over the last year or two. From the uppermost reaches of the attics at Knole Palace in Sevenoaks, to the depths of medieval undercrofts in darkest Sussex. However, even by my standards last week was a bit of an odd one.
As many of you may know, the National Trust have recently purchased another large section of the white cliffs of Dover. The site is iconic, by anyone’s standards, and the appeal and subsequent purchase of the site has now secured it for the nation. However, what very few people know is that the purchase also included a few added extras. 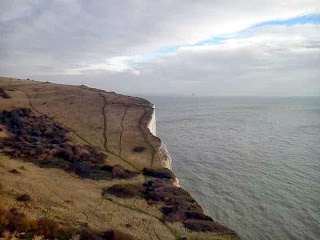 As one of the most heavily defended areas of England throughout history, Dover has a few secrets lying beneath its rolling green hills. Although today most of the white cliffs look to be open grassland, untouched for hundreds of years, this simply isn’t the case. In particular, during the last two world wars, the white cliffs were a maze of gun batteries, ammunition magazines, plotting rooms and underground shelters, and whilst most of the concrete and gun emplacements above ground may have been dismantled many of the underground workings still exist. The land newly acquired by the National Trust also contains one of these WWII sites – the Fan Bay Battery. Although little now remains of the gun battery itself, having been demolished in the years following the war, the Deep Shelter beneath the battery, one of the largest in the area, survives almost completely intact.
The shelter was designed to keep the gun crews safe from enemy action, but it was far more than just an air raid shelter. It is located many metres below the surface, in tunnels cut through the chalk, and originally contained offices, dormitories, a medical bay and access out to the cliff face – where two ‘sound mirrors’ were originally located. As the site had been virtually sealed off for many years the NT asked me to undertake a graffiti survey of the site to record all the WWII graffiti that appeared to be all over the site. How could I say no? 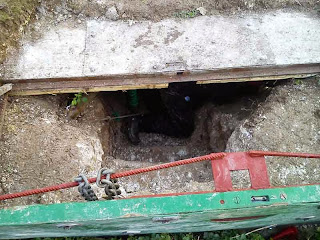 Well the first problem with a site like this is actually getting all the survey gear down there. The entrance is little more than a hole in the ground, in the middle of a blustery and windswept field, secured by a massive steel door. There are then three flights of steps to negotiate, each taking you many metres further underground, until you get into the deep shelter proper. And it is deep. Once down there it all looks pretty easy to begin with (apart from the fact that it reminded me of a bad video game – where zombie Nazis were liable to be lurking around every corner), and the first sections of tunnels are in superb condition. However, as I ventured deeper into the tunnels, led by project coordinator Jon Barker, I realised things weren’t going to be quite so easy. Further away from the entrance the nice steel tunnels gave way to simple tunnels cut into the chalk itself, held up with long since rotten pit props and old railways sleepers. Chalk from the roof lay scattered around and, as we ventured out towards the cliff face, I discovered both major tunnels to come to an abrupt end where the tunnel roof had caved in. A strange feeling indeed. Crawling along of your stomach, trying to get as far down each tunnel as possible to find a graffiti inscription left on the walls only 70 odd years earlier. 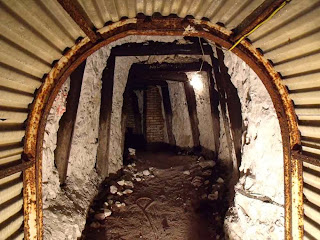 The survey took two days to complete. Two rather exhausting days lugging lights and tripods over chalk falls, keeping a wary eye out for trolls and zombie Nazis all the while (maybe it was their week off?), and actually produced far more in the way of interesting graffiti than any of us had first anticipated. In particular the distribution patterns were intriguing. Certain areas contained far more early graffiti than others, suggesting different uses and levels of access to various areas of the tunnel network. Sections near the cliff face were busy with graffiti, out near where the toilets used to be (no surprise there then), whilst the areas that used to be the medical bay and stores were completely free of inscriptions. Many of the inscriptions were by the men who built the tunnels, including sappers and pioneers from several different units (all recorded), as well as the gunners from units of the Royal Artillery who manned the big guns themselves. We had names, serial numbers, unit designations – all in all enough to actually track down they individuals via their service records. Sapper Hedge– we are coming for you. 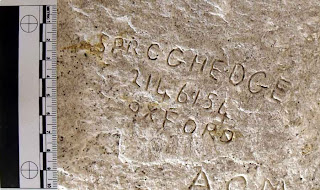 The graffiti inscriptions from the deep shelter add a whole new dimension to the history of the Fan Bay Battery. Now, alongside the military and engineering history of this fascinating place buried deep in the chalk, it’s possible to catch a rare glimpse of the men who lived and worked down there during one of the most significant periods of recent history. When the shelter is finally open to the public, which the NT plan to do very shortly, I hope that visitors will find it all as fascinating as I did – and pause a moment to consider what those scratches beneath the surface really mean. 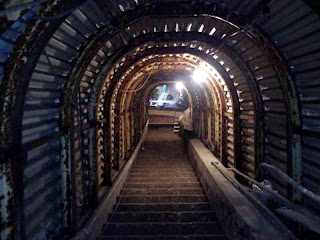 You really must go and visit...
Posted by Matt Champion at 11:51